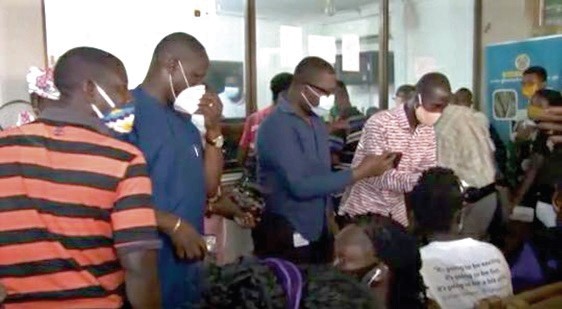 The Minority Ranking Member of Trade, Industry and Tourism, Mr Emmanuel Armah-Kofi Buah, has called on the government to re-engage GCNet to manage trade facilitation at the port until the new providers firm up their system to take over.

He expressed worry at what he described as a rushed implementation of the Integrated Customs Management System (ICUMS) at the Tema Port.

In his estimation, the chaos that had characterised the take-off of the ICUMS, apart from overburdening businesses with cost, clearly vindicated the minority's claim that the operators, Ghana Link Network Services, had no track record to roll out a single window platform for trade facilitation.

Mr Buah, who was at the Tema Port last Thursday with the Deputy Minority Ranking Member, Mr Sulemana Yusif, to observe the system’s implementation, pointed out that the testimony of the freight forwarders and importers was ample evidence that all was not well with the system.

He noted that the plight of the traders and importers who had crowded the Long Room facility seeking for solutions to the ICUMS functionality, especially at a time issues of public health were concerned, ought to be of concern to the government.

He said the country could not afford losing millions of cedis daily at a time it needed the resources to invest in public health in particular.

Freight forwarders had from Monday, June 1, 2020, raised issues with processing their Tax Identification Number (TIN) on the system.

Similarly, there were some challenges with the release of outstanding cargo of about 7000 at the various terminals operated by the Meridian Port Services (MPS), the Ghana Ports and Harbours Authority (GPHA) and other private players.

Some importers and agents who completed clearance processes and paid the necessary duties in the former Ghana Customs Management System (GCMS) operated by GCNet had their cargos released through a manual process.

On the other hand, those who were at certain stages before the roll out of the ICUMS last Monday have been asked to reprocess their documentation on the new system.

Presently, the representatives of the shipping lines have also been tasked to migrate manifest data from January to May 31 processed in the GCNet system into the ICUMS to serve as a preparatory data for officials to release all outstanding cargos.

Mr Buah maintained that what the team witnessed at the Long Room clearly gave an indication that the system was not functioning, thereby leaving the traders stranded and also denying the state the needed revenue.

Government, he said, had talked about the change the ICUMS was bringing, “and while we understand that the beginning of every new thing comes with challenges, officials ought to have had a better transition plan that would have ensured that the traders did not incur demurrage, rent and other incidental costs.”

“Our information is that, the Minister of Trade had told the traders on Monday that the challenges were going to be resolved within three days, but from what we have seen with people crowded at the Long Room with frustration written on their faces, there are no immediate remedies,” he added.

He said the outgone service providers had deployed systems, particularly from 2015 to 2018, that increased the government’s revenue by GH¢7.6 billion within the period.

“The only reason we had lower revenue in the latter part of 2018-19 was as a result of the government’s introduction of benchmark value reduction,” he stressed.