Prez Mahama to ministers: Perform or get the boot 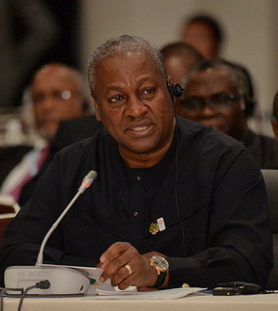 President John Dramani Mahama has warned that henceforth the period in office of ministers of state will be tied to their performance in helping to achieve his vision of propelling the country's socio-economic growth.
He said non-performing ministers of state would be removed from office no matter their clout in government or the National Democratic Congress (NDC).

Consequently, the President has tasked ministers of state to sign a performance contract on their policy direction, objectives, targets and strategies for implementing government policies in line with his vision and the NDC manifesto.

A team of experts has also been constituted to monitor and assess the performance of ministers of state on a yearly basis.

A Deputy Minister of Information and Media Relations, Mr Ibrahim Murtala Muhammed, who conveyed the President's sentiments to journalists at the Flagastaff House in Accra today (Friday), said some ministers had already made presentations on their policy direction, targets, objectives and strategies to a panel of experts at the seat of government.

He said at some of the meetings, both President Mahama and Vice-President Paa Kwesi Bekoe Amissah Arthur sat in to listen to the presentations. On some occasions, it was only the Vice-President who sat in together with the team of experts.

The ministers of state who had appeared before the team of experts included the Minister of Finance and Economic Planning, Mr Seth Terkper; the Minister of Information and Media Relations, Mr Mahama Ayariga; the Minister of Gender, Children and Social Protection, Nana Oye Lithur, and the Minister of Local Government and Rural Development, Mr Akwesi Oppong-Fosu.
The ministers were accompanied by the heads of the various departments and agencies under their respective ministries.