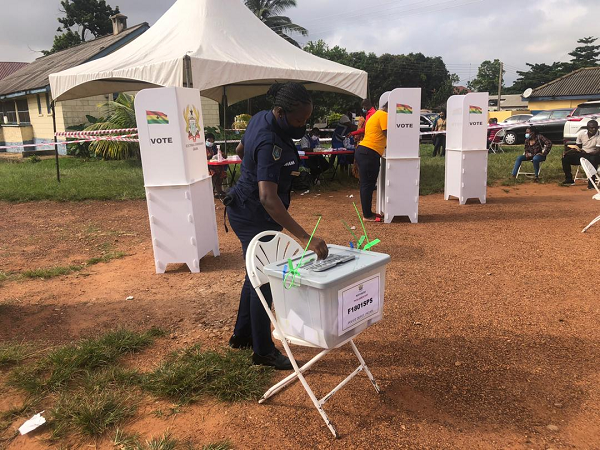 Four political parties have expressed satisfaction with the conduct of the special voting exercise last Tuesday.

The parties expressed the hope that the atmosphere that characterised the conduct of the special voting exercise would be the same for the general election on Monday.

The four parties are the New Patriotic Party (NPP), the People’s National Convention, (PNC), the Convention People’s Party (CPP) and the All People’s Congress (APC).

The biggest opposition party, the National Democratic Congress (ND), would, however, not comment on the exercise when the Daily Graphic contacted its Director of Elections, Mr Elvis Afriyie Ankrah, yesterday.

He said the party would hold a press conference on the issue today.

“We will address all those issues at the press conference,” he said.

In spite of lauding the exercise, the four parties, however, called on the Electoral Commission (EC) to resolve all outstanding issues relating to the exercise before the December 7 general election.

They said aside from few minor incidents recorded at some polling centres, reports of missing names on the voters register were scary and could be a recipe for disaster during the main elections on Monday.

The General Secretary of the NPP, Mr John Boadu, described the exercise as successful and lauded the EC for its efforts.

Speaking after visiting some polling stations last Monday, he said the EC had performed extremely well and expressed the hope that the performance would be carried into the December 7 polls.

The Campaign Manager of the PNC, Mr Emmanuel Wilson, told the Daily Graphic that voters not finding their names on the voters register during the special voting exercise was scary.

“Voters not seeing their names on the register was worrying. I am scared because this is a small number. Being security personnel, they comported themselves. They also knew that they could have another chance on December 7, 2020 but what happens on December 7 when the number of voters increases and majority do not find their names,” he asked, and said those voters would not have another chance and that could create challenges.

Mr Wilson, therefore, advised the EC to work assiduously to identify the cause of the problem and rectify it since the issue of omission of names could recur on a larger scale during the major election on December 7.

The PNC campaign manager was, however, satisfied with the conduct of the exercise with respect to the polling centres he monitored, describing the process as smooth.

Sharing his thoughts on the exercise, the flag bearer of the CPP, Mr Ivor Kobina Greenstreet, expressed the hope that the atmosphere which characterised the conduct of the special voting exercise would be the case for the December 7 elections on Monday.

He said even though he could not speak to the general picture which pertained throughout the country, his observation in Kumbungu in the Northern Region where he monitored the exercise was that the process was generally peaceful.

The CPP flag bearer said he was in Kumbungu in the Northern Region as part of his campaign tour for next week’s elections and, therefore, took time off to monitor the process.

“I am in Kumbungu to support my parliamentary candidate and so I cannot say much in terms of the whole process. However, there was no problem in Kumbungu where I was, as the process was well managed,” he told the Daily Graphic.

Mr Greenstreet said he wished the EC would have 100 per cent perfection, especially with reports of voters not finding their names on the register.

He was hopeful, however, that all other outstanding issues would be resolved by the Inter-Party Advisory Committee (IPAC).

The General Secretary of the APC, Mr Modecai Thiombiano, for his part, said the APC was generally happy about the commencement of the exercise but said it was wrong to turn away voters who did not adhere to the COVID-19 safety protocols.

“I think that the exercise started on time but it was wrong to turn away voters who were not in masks or who defied the COVID-19 protocols. The National Commission for Civic Education (NCCE) must educate people to obey the protocols so they are not disenfranchised,” he stated.

Mr Thiombiano, however, scored the EC 75 per cent and said the Mrs Jean Mensa-led EC was a “baby administration” and, therefore, the special voting last Tuesday was a mock exercise towards the general election on December 7.

He also added his voice to the missing names on the register but expressed the hope that the EC would put the right measures in place to ensure smooth and successful elections on Monday.