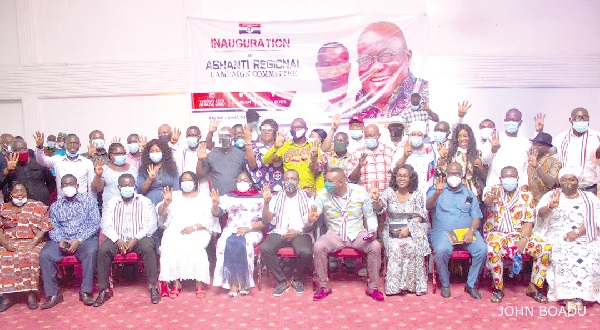 Members of the Ashanti Regional NPP campaign team after the inauguration
30.5k Shares

The New Patriotic Party (NPP) last Tuesday inaugurated its Ashanti Regional campaign team to spearhead its agenda 47/47 aimed at annexing all the parliamentary seats in the region.

The party is also targeting 90 per cent of popular votes in the region to ensure that the party wins the presidential election.

At the end of the recent voters registration exercise, the Ashanti Region has a provisional total voter population of 2,700,805 voters.

The team, which is being led by the Ashanti Regional Chairman of the party, Mr Bernard Antwi Boasiako popularly known as Chairman Wontumi, also has the objective of ensuring that the party wins the presidential election and retain Nana Adda Dankwa Akufo-Addo in power.

The General Secretary of the party, Mr John Boadu, who inaugurated the team, tasked members of the team to discharge their mandate diligently in spearheading the party’s campaign in its foremost “political world bank” in order to vindicate the confidence that had been reposed in them by the NPP leadership.

On behalf of the team, Mr Boasiako gave an assurance that the team would work hard to deliver all the 47 seats in the region to the party.

He said the huge turnout during the last voters registration exercise was an indication of the region’s readiness in ensuring that the party won the next general election.

Other members of the team include all metropolitan, municipal and district chief executives in the Ashanti Region and the Members of Parliament for the region.