Say no to corruption 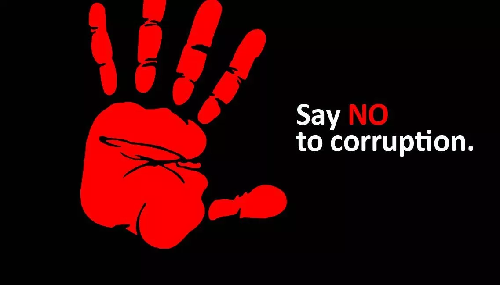 Say no to corruption
30.5k Shares

The world will not be destroyed by those who do evil, but by those who watch them without doing anything. — Albert Einstein

“Trotro” bus loaded with passengers was on its way to the central district of Accra when the police stopped it to conduct routine checks. Unfortunately, the driver’s roadworthy certificate renewal was two days overdue, and as a result, the police pulled him over. The passengers looked on in hopes of the police accepting a bribe offered by the driver to allow the driver to go unpunished.

Fortunately for them, they were let go of at the cost of a GH¢20 bribe with the promise of renewing the certificate as soon as possible. Ten kilometres from where the incident occurred, the vehicle broke down with stranded passengers left to their fate to find other means of getting to their destinations. This resulted in some passengers spending more money and more time than they had planned towards the journey.

Why we must say no

In the above scenario, who is corrupt? Did the passengers in the vehicle consider their safety when they had hoped the police would accept the bribe? What about the extra money they had to pay and extra time they had to spend to reach their destinations? One may also consider asking the following questions. Who is destroying Ghana? Is it the individuals who are amassing wealth at the expense of the common good or those who watch on without chastising? It is believed that all the actors in this scenario belong to the same category.

Desisting from a corrupt act yet watching on as others engage in it without taking appropriate measures to curb such makes one as corrupt as the culprit. Albert Einstein drew an accurate conclusion about such phenomenon by stating that, “The world will not be destroyed by those who do evil, but by those who watch them without doing anything.” Indeed, we become worse offenders anytime we fail to correct those engaged in corrupt acts. Moreover, society loses when corruption is condoned by others.

Exposing corrupt deeds of people in society with concrete evidence is lacking in our collectivist culture. The Ghanaian educational system falls short of inculcating into children the need to be assertive to politely offer criticisms when necessary. Extended family ties worsen the situation. For instance, “he is my uncle’s wife’s sister’s friend so if I expose him by telling the truth, my uncle will not be happy with me”. Also, “he is my father’s best friend’s mother-in-law; as such, I cannot betray him”. Reasons such as these make people helplessly watch on as others engage in corruption. The first implication is that they do not have the courage to do so.

Second, how would they survive without earnings from bribery when their salaries are not enough? They must be in the good books of corrupt people who are kins. Finally, they do not want to incur the displeasure of family members. Consequently, we have allowed corruption to take root in our systems, destroying everything that is meant for our common good.

The war against corruption will only be successful if attention is paid to attitudinal change through civic education – using films that show the devastating effects of corruption; changes that embolden people to express their values candidly and politely. People in society must learn to discourage one another from engaging in corrupt acts. They should learn to police one another and be actively involved in the fight against corruption because indifference creates a conducive environment for it to thrive.

Society must learn to discourage self-aggrandisement by desisting from hailing people of this calibre and rather focus on people rich in character that is worthy of emulation, as well as those with ideas for progress. Importantly, ethical individuals must avoid situations that lead to engaging in corrupt acts and openly stand for their values. It is not easy, because they may be called names, resisted, threatened and ostracised by corrupt individuals. It takes courage, resilience, patience, endurance and contentment to see others getting rich while one struggles to ethically make ends meet. However, it is worth the rewards that await those who persevere to the end.

In conclusion, an excerpt from the late President John Atta Mills’ State of the Nation address to Parliament in February 2012 is worth noting — “Let me state here and now that I remain undaunted by attempts to thwart the fight against corruption by legal and technical means… I do not care whose ox is gored when it comes to the fight against corruption. And neither will I be off-tracked by all the sideline comments that are being made to befuddle the hardcore issues.” So let’s be courageous enough to learn to speak out against corruption.

The writer is a lecturer at Ashesi University, Accra.