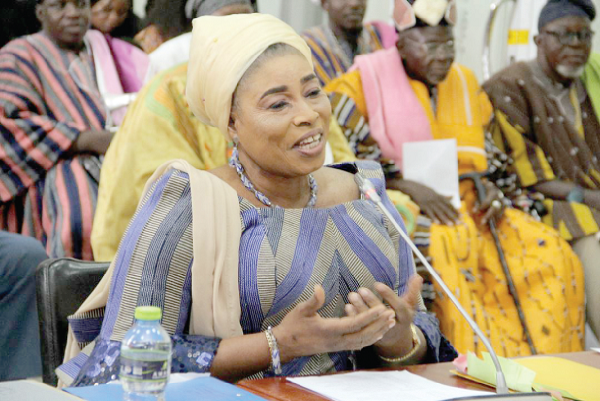 The Minister designate for Gender, Children and Social Protection, Abudu Lariba Zuweira, has given the assurance that a toll-free App, "Boame" (help me) for victims of gender-based violence, especially women, would be reactivated when given the nod to steer the affairs of the ministry.

When activated, the app would alert the ministry and the Ghana Police Service to move in quickly upon a call by a victim for the perpetrator to be arrested and prosecuted.

She gave the assurance when she appeared before the Select Committee of Parliament to be vetted for the position in Accra yesterday.

Hajia Zuweira also said that when approved, she would support a move to roll the vulnerable, especially victims of sexual violence onto the National Health Insurance Scheme (NHIS).

She further said that her outfit would map out a strategy to minimise the menace of witchcraft and related disturbances in northern Ghana, adding that improving the quality of life of women and the vulnerable will be top on her agenda.

Hajia Zuweira, a deputy minister of the sector ministry, was being vetted together with the youngest Member of Parliament, Francisca Oteng Mensah, as her deputy upon approval.

Hajia Zuweira, the New Patriotic Party (NPP) Member of Parliament (MP) for the Walewale Constituency, was not asked many questions because she had earlier appeared before the committee as a deputy minister designate of the same ministry

Mr Suhuyini asked about her alleged involvement in the theft of tricycles under the Northern Development Authority, which she denied.

Mr Muntaka, on the other hand, sought clarity about her alleged shea nut business involving some of her partners which went wrong.

Responding, the nominee said although she was aware of the issue which was later sent to court and had since been settled, she was never involved or invited on the matter.

When approved, the minister designate further said her outfit would increase the school feeding grant from 97 pesewas to an appreciable amount, as well as pursue the Finance Ministry for early release of grants to caterers to improve the nutritional value of the food.

She also promised to work in collaboration with the Education Ministry to stamp out betting among minors, join hands with the Ministry of Communication to improve ICT literacy among girls, and also work closely with the Ghana Statistical Service to identify child-marriage endemic areas, track them and rescue the victims.

On the issue of head porters “kayayei”, Hajia Zuwera said: "Mr Chairman, I see a lot of these kayayei with smart phones. So what I intend to do is to assist them market their produce on their phones to make money," she said.

"We need a policy to exempt minors from embarking on head poterage and in the case of adults, they must work decently under an agency,” she said.

The minister designate was accompanied by a large entourage of chiefs and family members to her two-hour vetting exercise yesterday.