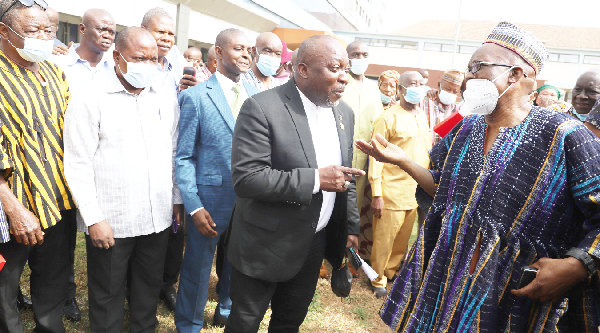 Parliament will from next year initiate new set of programmes to help strengthen its oversight responsibility to deepen the democratic culture and values of the country.

The set of reforms that would be pursued would also help the legislative body to assert its independence to serve as a check on the executive.

The Speaker of Parliament, Mr Alban Sumana Kingsford Bagbin, said this at a meeting with former Members of Parliament (MPs) held at the Justice D.F. Annan Auditorium at the Parliament House in Accra yesterday.

Mr Bagbin said looking at the current democratic dispensation in which the country found itself, with a hung Parliament, there was the need to pursue a set of reforms in Parliament to enhance its service delivery to the people and for the good of the nation.

"We need to build a democratic governance that is based on concensus and not that of party in government and in opposition to deliver the goods to the people and move this country forward," he stated.

That, he said, was the reason Ghanaians voted this time to ensure a hung in Parliament to ensure that the House worked together for the good of the citizenry and the nation.

"We must, therefore, as parliamentarians move from away from patronising the executive and begin to put them on their toes to demand for accountability on behalf of the people and that is the way Parliament will go next year", he stated.

Mr Bagbin reiterated that for Parliament to strengthen its oversight responsibility and assert its independence there was the need to work closely with the civil society organisations (CSOs) to build its capacity to initiate the needed reforms to play that role effectively on behalf of the people.

He told the former MPs that their inputs would also be sought when the need arose for Ghana to build the kind of Parliamentary democracy and culture that the nation and the people desired.

"Don't forget that you have wealth of experience as former MPs and, therefore, you should not see yourselves as having nothing to contribute towards building the kind of democratic culture and values we want to leave for this nation and generations to come", he said.

He said under his leadership as a Speaker and a former MP, he had initiated a number of steps to see to the welfare of former MPs and that would begin to bear fruits from next year.

The Clerk of Parliament, Mr Cyril Kwabena Oteng Nsiah, for his part commended both past and present Speakers and Leadership of Parliament for their contributions to the forum of the former MPs.

He further commended Mr Bagbin for the continuous support he is providing for the forum in pursuant of his objectives and ideas that had become an important voice that had provided an avenue to tap into the experience of former MPs in the effort to build concensus among key governance stakeholders in enhancing the practice and procedures of Parliament.

He gave an assurance that the Parliamentary Services would also continue to provide the needed administrative support services for the forum in undertaking its activities.

He also expressed the hope that the forum would grow into a formidable force that would contribute significantly to the development of Ghana's emerging democracy.

The President for the Former MPs Forum, Mr David Apesera, who served as People's National Convention (PNC) MP for Bolgatanga Constituency in the Upper East Region between 2001-2009, said the last time such a meeting was held was when the Speaker was a Deputy Speaker of Parliament.

He commended the Speaker for championing the cause of former MPs and appealed for a secretariat for former MPs at Parliament House and also for a small budget to be raised to help run the activities of the forum.

A Lecturer at the Political Science Department of the University of Ghana, Dr Alidu Seidu, who spoke on the topic: "Ghana's Hung Parliament: Challenges, Opportunities and National Goal", called for concensus building among the Majority and Minority in Parliament to help cure the current developments in Parliament for the common good of the people of Ghana.

The Executive Director for the Institute for Democratic Governance (IDEG), Dr Emmanuel Akwetey, for his part, said the reforms in the local government system that would ensure the election of metropolitan, municipal and district chief executives (MMDCEs) would create avenues for the former MPs to share their expertise and contribute to the building of the system.