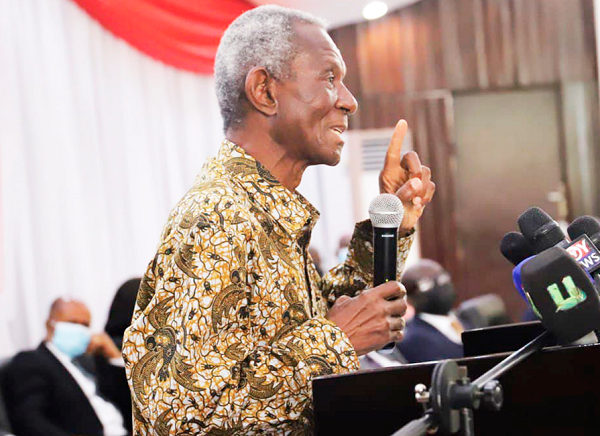 Three speakers at the 16th edition of the Re: Akoto Memorial Lectures in Kumasi have stressed the need for the nation to honour the late Baffour Osei Akoto for the tremendous role be played in multi-party politics and human rights development of the country.

The speakers were economist, Mr Kwame Pianim; a former Speaker of Parliament, Prof. Mike Oquaye, and a son of the late linguist and Minister of Food and Agriculture, Dr Owusu Afriyie Akoto.

Baffour Osei Akoto, a senior linguist of the Asantehene, was the founder of the National Liberation Movement(NLM) which later merged with the Northern People Party (NPP) to form the United Party (UP), the founder party of the ruling New Patriotic Party.

The lecture, the 16th since its inception of the lecturers was organised as part of activities marking the Students Representative Council (SRC) Week celebration of the Ghana School of Law..

The theme for this year's commemoration was : " The legacy of Baffour Osei Akoto: A family man, a chief and a statesman"

On November, 11 1959, Baffour Akoto and seven others were arrested and summarily detained without trial under the Preventive Detention Act( PDA).

Counsel for the suspects, Dr J.B. Danquah, filed an application for habeas corpus at the High Court for the release of the eight persons to enable them to stand trial at the court but the court refused the application on the grounds of lack of jurisdiction.

Not satisfied, Dr Danquah,who later also became a victim of the PDA, proceeded to the Supreme Court, invoking the apex court’s original jurisdiction for interpretation of Article 13(1) of the 1960 Constitution, which, among other things, provided that on assuming office, the President shall make a declaration that he will ensure the safety and security of all persons in Ghana without discrimination.

Reading the court’s decision, the Chief Justice, Justice Arku Korsah, said “the Preventive Detention Act, 1958, is not contrary to the Constitution and Parliament is competent to pass such an act even in peace time.”

He said it was not accepted that the High Court judge, on hearing the application, was obliged to have released the suspects.

Since then, that decision has been a subject of criticism by legal educators and scholars since in their view it gave unfettered power to President Kwame Nkrumah to trample on the fundamental rights of Ghanaians.

Name airport after him

Mr Pianim, who chaired the event, proposed that an international airport be built in honour of Baffour Akoto.

Alternatively, he said an international civic institute could also be established to train the youth in civic duties and on human rights issues in memory of the late politician traditional ruler and statesman.

He commended the Asantehene, Otumfuo Osei Tutu II, for initiating the lecture and the Ghana School of Law for also making it part of its annual programmes.

Prof. Oquaye also extolled the virtues of Baffour Akoto and said even though his action at the Supreme Court did not succeed, it provided the basis for the review of the constitution such that the Ghana had had new constitutions in 1969, 1979 and 1992.

He said the country’s politics could not be written without mentioning the contribution and role of Baffour Akoto.

He said as a generational thinker and futuristic person, “he accepted in 1956 the proposal for general election in the hope that even if his party did not form a government, it would have representatives who would offer alternative ideas for national development.”

Dr Akoto said at the time the liberty of the Ghanaian was being eroded with the introduction of one-party rule in Ghana , “Baffour and his colleagues fought to reverse that trend because it was incongruent to our traditions and that policy was bound to deprive the citizenry of their rights and freedoms.”

According to him, “the greatest tribute we can pay to his memory is for each and everyone of us to do all we can to preserve for posterity as he did, the best in our traditions, cultures and societies thereby enriching all humankind.”

The Attorney General and Minister of Justice, Mr Godfred Yeboah Dame, noted that in building a society based on the rule of law, “We must be guided by the effects of the law on ordinary people and not only the high and mighty or the specific class of people you target. “

He said the case of Re:Akoto and seven others was a classical case that all facet of society could be affected by the law.

According to him, the judgment of that case had become a scar on the conscience of the nation.