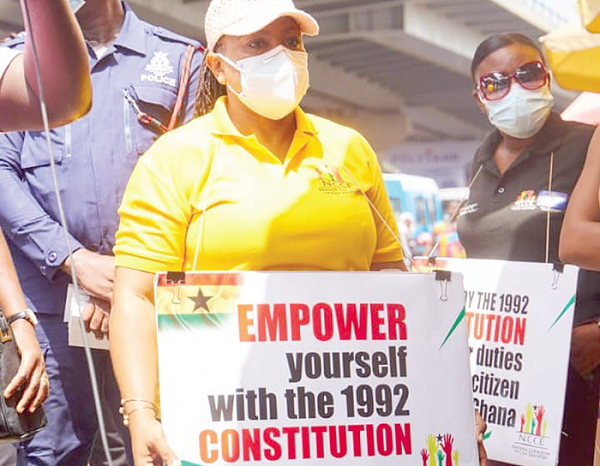 The National Commission for Civic Education (NCCE) has reiterated the need for Ghanaians to put Ghana first in all their endeavours.

“In our pursuit of liberty, equality of opportunity and prosperity, we must make it our duty to understand these aspirations to further consolidate Ghana’s democracy,” it stated.

A statement issued by the NCCE to commemorate the 2021 Annual Constitution Week celebration also stressed the need for Ghanaians to rally round the 1992 Constitution and defend it at all times.

The statement said the NCCE held the firm conviction that every citizen must know their rights as citizens, understand the principles and objectives laid down in the Constitution to promote nation building for a better Ghana.

“As a living document, the commission is convinced that it is only Ghanaians/citizens who can give room for the constitution to breathe and function effectively,” it stated.

It explained that the NCCE’s celebration of the Constitution Week was essentially fulfilling one of its mandates to create and sustain awareness of the principles and objectives of the 1992 Constitution in order to deepen and sustain Ghana’s democracy.

“The NCCE since 2001 has been celebrating the referendum day in which Ghanaians overwhelmingly agreed to adopt the Constitution on April, 28, 1992 as the fundamental law of the land.”

The statement said under the campaign dubbed: ‘Rally Round The GhConstitution,’ the NCCE would vigorously engage citizens on Ghana’s Constitution and raise awareness of the need for everyone to be abreast of the Supreme Law of the land.

As part of activities to mark this year’s celebration, it said the commission would interact with the general public, display civic messages on the duties of a citizen, intensify public education on constitutionalism and distribute copies of the 1992 Constitution of Ghana to the general public to emphasise the importance of the constitution as a living document in every facet of our lives.

It said the NCCE would also engage security services reminding them of their legitimate duty to protect and uphold the tenets of the 1992 Constitution in their line of work.