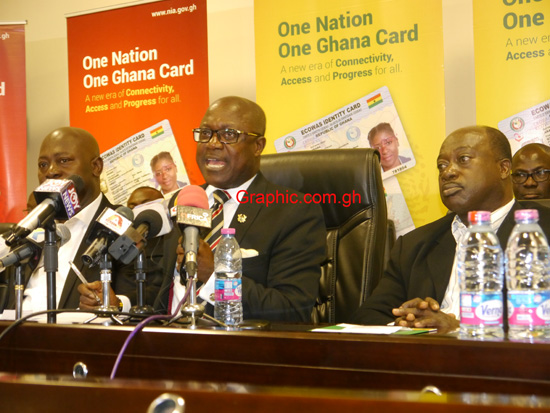 The Ghana Card registration in the Volta Region will come to an end tomorrow.

The registration which commenced on Monday, July 22, 2019 started at a slow pace.

However, as the days went by, the people showed a great zeal to get identity cards as citizens of Ghana.

Also, an unsubstantiated rumour that the Ghana Card would be used to vote in 2020 also added to the enthusiasm that led to the rush to the registration centres.

The situation caused long queues at the various registration centres, resulting in some people, including the elderly, even sleeping at the centres in order for them to get the opportunity to be among the first to be captured the following day.

The process was not all smooth for prospective applicants.

The region had its fair share of challenges associated with the registration such as long queues, machine breakdown, slow processing and Internet connectivity problems among others.

During the period of registration, the Daily Graphic visited about eight centres in Ho to observe the process.

It was gathered that a good number of the people did not have birth certificates, especially the elderly,while some young ones too did not have the biometric birth certificate and, therefore, had to fall on others to guarantee for them to be registered, a process some lamented to be tedious.

Ordeals of the people

At the Ho Municipal Assembly for instance, the scene was not a pleasant one. As early as 6 a.m. when the Daily Graphic got there, a large crowd of people had gathered, some stood on the bare floor while others stood under trees awaiting their turn.

One of the applicants, Mr Godwin Makafui, said he got to the centre at about 11 p.m. only to meet men and women sleeping on the bare floor at the centre in order to get registered first in the morning.

“So if you get here even by 6 a.m., you cannot register because the crowd you will meet will discourage you. Some people have stayed at the centre for days without getting the opportunity to register,” he lamented.

Another person, Madam Farouq Fatia, confirmed the ordeal, saying although she had just got her card, "I had to sleep at the centre every night under a mosquito net until I had my card; and it is not only me, there are a number of people who sleep here every night, and that is not good."

At the SSNIT registration centre on Thursday, August 8, Mrs Ivy Selorm shared her ordeal of being at the centre for five days without being able to complete her registration.

"Although I could not sleep at the centre overnight, I arrived here at 4 a.m., early enough, hoping to finish mine on time, but I was told I could not go through the process because those who slept over were given numbers so they had to attend to them first," she said.

Another challenge had to do with persons who had gone through the process but had not yet been issued with the card.

Although many of the people have called on the National Identification Authority (NIA) to extend the registration period, the Head of Corporate Affairs, Mr Francis Palmdeti, said the mass registration would not be extended in the region.

Urging the people to be patient with the authority, Mr Palmdeti said opportunities would be created for everybody to be captured even after the closing date for the registration.

He explained that the NIA, through its mop-up exercise, would create 120 centres that would still be operating across the region even after the deadline.

Describing the process in the region as successful, Mr Palmdeti stated that despite the challenges, between 28,000 and 30,000 people were registered daily in the region.

"So far the numbers are increasing steadily and we are hoping to do more with the few days left,” he added.

According to him, one major problem the NIA encountered in the course of the exercise was Internet connectivity, especially in the remote areas, but that, he said, was catered for through the establishment of ‘print farms’ where they went to get Internet connectivity to print the cards for the registered persons.

He also assured persons who were yet to receive their cards that avenues would be created for them to go for their cards.