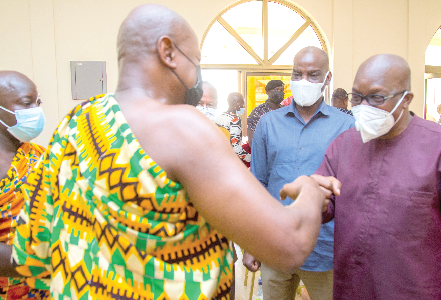 Togbe Afede (back to camera) exchanging pleasantries with Mr. Bagbin

The Speaker of Parliament, Mr. Alban S.K Bagbin, has stressed the need for Members of Parliament (MPs) to establish offices in their constituencies to address the needs of the people.

He said MPs must have offices and staff that would support them to perform their duties.

He explained that most MPs were professionals, yet had no time to "read the voluminous documents" due to the pressure on them, hence they needed staff who would go through the documents, summarise and break them into simple language for the MPs as is done in every Parliament in the world.

Mr. Bagbin said this when he paid a courtesy call on the Agbogbomefia of the Asogli State, Togbe Afede XIV, prior to the post-budget workshop for MPs in Ho, the Volta Regional capital.

He said the workshop would enable the MPs to share their views on the Budget Statement and Economic Policy presented in Parliament on November 17.

Mr. Bagbin described the situation where people looked for MPs in their private homes as 'undemocratic'.

He said he planned to strengthen Parliament to be able to call the Executive to always respond to the needs of the people.

He said Parliament would do its best to create an enabling environment for the private sector to thrive and flourish.

He said Togbe Afede's leadership, intelligence and efforts, among other things, had projected Ghana as a star of Africa.

For his part, Togbe Afede acknowledged the refreshing change in Parliament and the roles Mr. Bagbin had played as Speaker.

He noted that the COVID-19 and the general election had exposed the country's vulnerabilities.