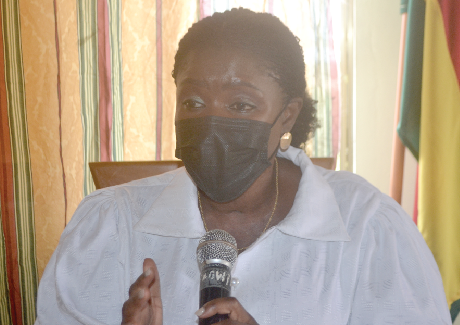 A Deputy Chairperson of the National Commission for Civic Education (NCCE) in charge of Finance and Administration, Madam Kathleen Addy, has called on Ghanaians to work towards protecting the country’s peaceful atmosphere.

“As Ghanaians, we must cherish the peace in the country and ensure that it is protected and sustained at all times to promote national cohesion and development for the benefit of the citizenry,” she said.

According to her, it is the responsibility of every Ghanaian to ensure that the nation remains peaceful to drive its growth and development, saying “it is not only the duty of those in government to protect the country’s peace but the governed as well”.

Madam Addy was addressing a stakeholders’ engagement on peace and security organised by the NCCE in partnership with the Ministry of National Security with support from the European Union (EU) at Agona Swedru in the Central Region.

Madam Addy cautioned Ghanaians against taking the peace in the country for granted as it would be at our own peril, adding “Ghana is not a perfect nation and that we must strive and ensure that its peace is not compromised”.

She urged Ghanaians to be on the lookout and guard against acts that have the tendency to threaten the peace in the country since any form of instability would be very devastating for the nation.

“Due to Ghana’s unique geographical location, it has become a hub of many foreign nationals and the security agencies must be alert to prevent miscreants from entering into the country to foment trouble.”

“I call on all Ghanaians to volunteer information on individuals from neighbouring countries facing political instability suspected to have entered the country illegally so that they can keep track of their movements,” she stressed.

During the open forum, some of the participants appealed to the media not to allow their platforms to be used to disturb the peace in the country as it happened in Rwanda many years ago.

Others also called for the expeditions disposal of cases in the justice delivery system to prevent people from resorting to instant justice instead of the law courts.