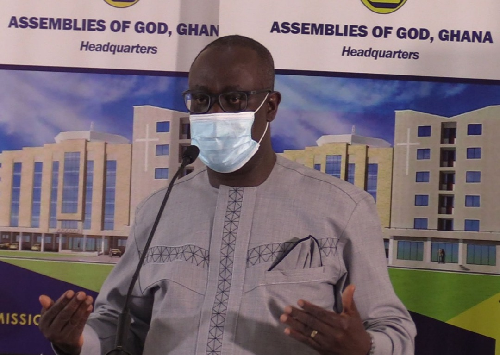 The Ghana Pentecostal and Charismatic Council (GPCC) and the Christian Council of Ghana (CCG) have urged politicians to ensure that they embark on clean campaigns devoid of insults and unsubstantiated claims towards the December 7 elections.

They also asked them to let peace be the hallmark of their campaigns as they criss-crossed the country to canvass for votes.

The President of the GPCC, Reverend Professor Paul Frimpong Manso, who is also the General Superintendent of Assemblies of God, Ghana, said political messages ought to be factual such that they could be substantiated, defended and justified.

“Whatever you put in the public domain will be interpreted by history and your ideology. Your messages must be packaged such that distortions will be minimal. Politics is a game we do to the glory of God. We must also promote peace so that the people you seek to help will not suffer,” he said.

Rev. Prof.  Frimpong-Manso was speaking during a courtesy call on the GPCC and the CCG by the Flag bearer of the opposition National Democratic Congress (NDC), former President John Dramani Mahama, to officially introduce his running mate, Professor Naana Jane Opoku-Agyemang, to the clergy.

The event was attended by some bigwigs of the NDC as well as leaders of the Christian community.

They included the National Chairman of the NDC, Mr Samuel Ofosu Ampofo; the Campaign Manager of the NDC, Professor Joshua Alabi; and some NDC Members of Parliament such as Dr Zanetor Agyemang-Rawlings, Mr Samuel Okudzeto Ablakwa, Mr Richard Quashigah and Mr Sam George.

Ready to serve Former President Mahama described his running mate as a God-fearing woman who understands the challenges of the country and is ready to serve.

“Professor Opoku-Agyemang is God-fearing, a woman of unquestionable integrity, hardworking, and a results-oriented person. She has carved a niche for herself as a distinguished scholar in Ghana, on the African continent and across the world.

“If you listened to her maiden address, you will find that she has a remarkable appreciation of our struggles as a nation and what it will take for us to attain the highest pedestal of human and physical development that we are capable of as a country,” he said.

Mr Mahama said the NDC was ready to chart a new path of prosperity, inclusiveness and sustainable development for the country.

According to him, team John and Jane was the best answer to resolving what he described as the myriad of challenges facing the country.

“Together with her as my Vice-President, God willing, we shall, under the $10 billion #TheBigPush Infrastructural Plan, complete the 200 Community day secondary schools we were building and many other projects that the current government has abandoned for the benefit of Ghanaians,” the former President said.

Appreciation For her part, Prof. Opoku-Agyemang lauded Mr Mahama for choosing her as his running mate, adding: “I see it as an act of faith, courage and trust.” Prof. Opoku-Agyemang, a former Minister of Education and former Vice-Chancellor of the University of Cape Coast, was selected by the former President as his running mate in July this year, ending many months of speculations as to who he was considering for the position.