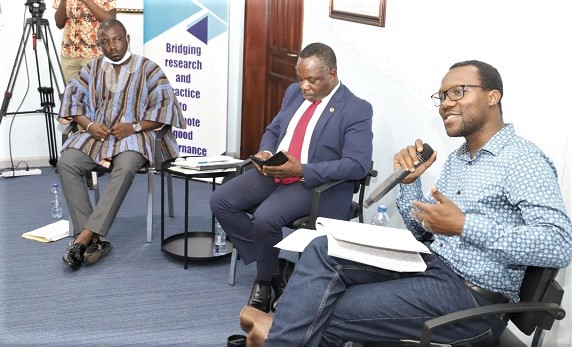 Dr George Ofosu (right), Assistant Professor of the Department of Government, London School of Economics, speaking at the workshop in Accra. Those with him are Dr Evans Aggrey-Darkoh (middle), Chief Director of the Ministry of Parliamentary Affairs, and Dr Seidu Alidu (left), Senior Lecturer of the Department of Political Science of the University of Ghana. Picture: GABRIEL AHIABOR Follow @Graphicgh

It has emerged that endorsement of politicians and political parties by chiefs and other traditional rulers affect the choices that their subjects make at national elections.

A new study by the Ghana Centre for Democratic Development (CDD-Ghana) found that such endorsements could provide an undue advantage to the beneficiary political candidates especially when they were able to solicit public support from the chiefs.

It, however, added that the candidates from the incumbent party were often better positioned than opposition candidates to induce chiefs to support them publicly.

Titled: "Do Endorsements by Traditional Leaders Affect Vote Choice?” the study was conducted to assess the impact that endorsements have in the political dispensation.

The LSE Global Challenge Research Grant and the International Growth Centre provided support for the project.

Sharing findings of the study at a workshop organised by CDD-Ghana and the International Growth Centre (IGC) in Accra yesterday, Prof. Ofosu said the study showed that chiefs’ endorsements affected vote choice.

He noted that the 1992 Constitution bans traditional leaders from engaging in “active party politics”.

He said the Code of Royal Ethics, published by Ghana's House of Chiefs (2012) states that: “A chief should not make divisive statements either in public or to the media which will show his party political leaning”.

Similarly, “A chief should not openly declare his support by word or deed for a particular political party”.

“Respondents who were exposed to an audio recording of their traditional leaders’ message approving the incumbent were more likely to vote for him compared to those who did not hear it.

“The effect is confined to voters who were either non-copartisans of the endorsed candidate and respondents who held positive prior evaluations of the chief,” he said.

Prof. Ofosu said the study also found that the effect of endorsement messages was highest among non-copartisans who held positive evaluations of the chief.

He explained that those results suggested that citizens’ trust and assessments of chiefs' performance shape how they incorporate their endorsements into their electoral decisions.

“We do not find that chiefs' influence runs through a coercive channel.

“In addition, our results demonstrate that chiefs' active endorsements do not significantly hurt their social positions, at least in the short term,” he said.

According to him, endorsements did not change individuals’ overall willingness to contribute labour or resources to community help projects.