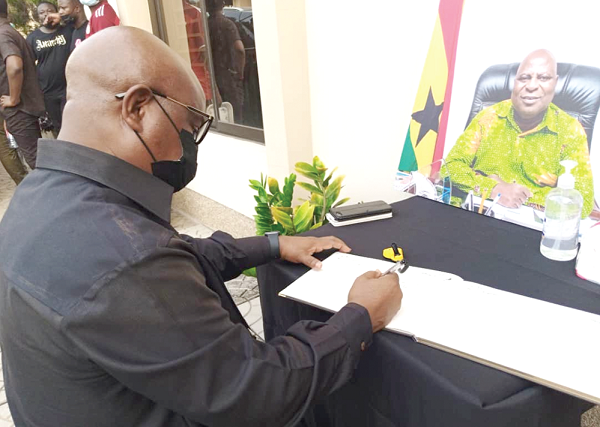 The New Patriotic Party (NPP) last Friday lost one of its leading members, Mr Ishmael Ashitey, and described his death as a great loss.

Mr Ashitey, who was also a former Greater Accra Regional Minister and former Regional Chairman of the NPP, passed on at the International Maritime Hospital in Tema on January 7, 2022.

He served as the Member of Parliament (MP) for Tema East in the second, third and fourth Parliaments under the Fourth Republic of Ghana.

In Parliament, he served on the Mines and Energy, Foreign Affairs, Government’s Assurances and the House committees, and also served as a Minister of State at the Ministries of Food and Agriculture and Trade, Industry and President’s Special Initiatives under the Kufuor administration.

During his tenure as Greater Accra Regional Chairman of the NPP, he led his party to retain majority of the parliamentary seats in the 2016 general election.

Mr Ashitey was also aspiring to contest the National Chairmanship of the NPP this year.

Until his demise, he was a member of the National Executive Council of the NPP and the NPP National Council.

He is reported to have hosted some friends and family members in the afternoon prior to his demise at the hospital.

In a tweet, Vice President Dr Mahamudu Bawumia expressed his condolences to the family on the passing of Mr Ashitey, who was a former Minister of State, former Tema East MP and NPP regional chairman.

He wrote: "My thoughts are with them at this difficult period."

Meanwhile, the Ghana News Agency (GNA) reports that the NPP has described the death of Mr Ashitey as a great loss to the party.

"His death is a great loss to the party. We will liaise with the family to give him a befitting burial," the General Secretary of the NPP, Mr John Boadu, said after leading a party delegation to the residence of the former Greater Accra Regional Minister in Tema.

"We are saddened by this and want to use this opportunity to get the family to take heart," he said.

Meanwhile, a book of condolence has been opened at his residence.

Many people, mainly from the NPP, are trooping to the residence to commiserate with the family.

Dr Letsa called on the family last Saturday and expressed shock at the demise of his former colleague.

“Hon. Ishmael Ashitey was a great friend and colleague. He will be greatly missed. May his soul rest in perfect peace,” he said.

Mr Asamoa wrote: “We have lost a pillar of the NPP. He taught so many the path to politics. Go in peace, our political father.”

The immediate past MCE of the Tema Metropolitan Assembly (TMA), Mr Felix Mensah Nii Annan-La, in an interview with the Daily Graphic, said Mr Ashitey’s death would create a huge vacuum in the NPP.

“I am a product of some of the young politicians Mr Ashitey mentored in Tema,” he added.