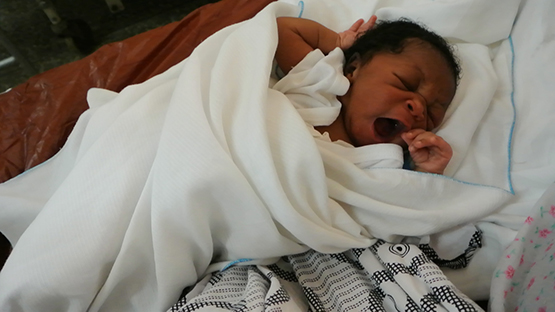 The Ghana Health Service (GHS) has received 10,000 tubes of CHLORXY-G gel, a medication that prevents umbilical cord infections in newborns

The donation by Drugfield Pharmaceuticals Limited, manufacturers of Chlorhexidine digluconate 7.1 per cent gel, at a cost of GH¢100,000 is to help reduce neonatal mortality and morbidity in the country.

The use of the gel forms part of the GHS’s policy change in umbilical cord care in newborns.

According to the World Health Organisation (WHO), neonatal mortality constitutes a high proportion of global infant mortality.

Each year, three million newborns die globally, with approximately 13 per cent of the deaths caused by infections.

Ghana’s newborn mortality rate is 32 per every 1,000 live births, with infections accounting for 31 per cent, pre-term birth complications 29 per cent and related events causing 27 per cent of neonatal mortality.

The Director of Family Health, GHS, Dr Patrick Aboagye, who received the donation in Accra, said the policy decision by the sector ministry and the GHS to gradually replace the use of methylated spirit with the CHLORXY-G gel in umbilical cord care was in line with the WHO’s new recommendation issued in 2014.
According to him, some mothers engaged in unhealthy practices, some of which included the use of cow dung to dress the umbilical cord of their babies.

Use of harmful substances

Dr Aboagye explained that the freshly cut umbilical cord was a common entry point for bacteria, which led to newborn sepsis and death.

He, therefore, warned mothers and caregivers to desist from the use of harmful substances as a dressing substance for the umbilical cord of their babies, as the practice led to infection, with potential spread to the surrounding tissues and bloodstream.

He said the Chlorhexidine digluconate 7.1 per cent gel (CHLORXY-G gel) would currently be used alongside methylated spirit until effective education had been given to mothers and caregivers, especially through the antenatal clinics, to ensure the effective and efficient management of umbilical cord in the country.

The Marketing Director of Drugfield Pharmaceuticals Limited, Mr Akande Olusola, who made the donation, said the gel had been clinically tested and proven to be very safe for use in newborns.

He noted that it was the expectation of the company that the donation would go a long way to promote adherence to the new policy to further reduce neonatal morbidity and mortality in the country.

He indicated that the gesture would also reinforce the partnership among Drugfield, the MoH and GHS.