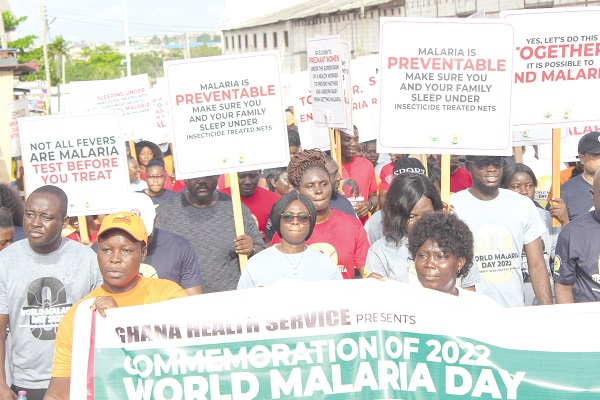 Officials of the Ghana Health Service and other workers on a health walk to mark World Malaria Day. Picture: ERNEST KODZI Follow @Graphicgh

This year’s World Malaria Day was commemorated in Hohoe in the Volta Region on April 25, 2022, with a call on the citizenry to embrace the use of treated mosquito nets to prevent contracting the disease.

“We can eliminate malaria household by household, community by community and district by district when we resolve to maintain high standards of hygiene,” the Volta Regional Minister, Dr Archibald Yao Letsa, said.

He said poor sanitary conditions in communities contributed to the high incidence of malaria in the country.

The theme for the commemoration was: “Harness innovation to reduce the malaria disease burden and save lives.”

Dr Letsa directed municipal and district assemblies (MDAs) in the region to team up with their Environmental Health units to organise monthly clean-up exercises in the communities to rid the neighbourhoods of mosquitoes.

He urged the assemblies to enforce their sanitation bye-laws to stimulate proper waste disposal practices by households.

He said the government was collaborating with the waste management company, Zoomlion Ghana Limited, to construct modern integrated recycling and composite plants in all regions in the country.

According to him, the Volta and the Western regions constituted the two highest burdens of malaria in the country, accounting for almost 50 per cent of cases.

He, therefore, urged the people of those regions to double their efforts in the fight against the disease.

The Deputy Volta Regional Director of Public Health, Dr Senanu Kwesi Djokoto, said the region had 1,084,488 pieces of treated mosquito nets, out of which 436,103 were distributed to households last year.

The National Malaria Advocate, Oheneyere Gifty Dansoa Anti, said the massive funds and resources committed to the fight against malaria by the government would yield little by way of results if individuals did not make conscious and sustained efforts to prevent contracting the disease.

The President of the Volta Regional House of Chiefs, Togbe Tepre Hodo IV, said under no circumstance should the malaria crusade be soiled with political party colours.

Togbe Hodo, who is the Paramount Chief of Anfoega, said malaria did not attack its victims on the basis of their political party affiliations and, therefore, called for concerted efforts by all to tackle the problem.

In attendance was a Deputy Minister of Health, Alhaji Mahama Asei Seini.