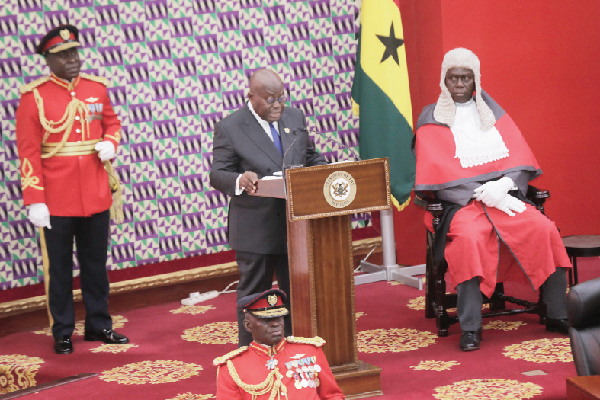 President Nana Addo Dankwa Akufo-Addo will today deliver to Parliament the State of the Nation Address (SONA), his first since he was given a second term in office on January 7, this year.

This is in line with Article 67 of the 1992 Constitution, which says: “The President shall, at the beginning of each session of Parliament and before a dissolution of Parliament, deliver to Parliament a message on the state of the nation.”

The last time President Akufo-Addo performed this constitutional duty was during the dissolution of the seventh Parliament on January 5, this year to end the first four-year term of the government.

Expectations are high, as the President is expected to use the occasion to galvanise the nation for development, even in the face of the COVID-19 pandemic.

Some Ghanaians the Daily Graphic spoke with expressed varied concerns and expectations of the President in his message.

The views ranged from addressing the high cost of living, unemployment, corruption and the general socio-economic well-being of the citizenry.

According to some of the respondents they expected President Akufo-Addo to announce measures to turn around their fortunes and restore hope to them, while others urged him not to sugarcoat the situation but rather let Ghanaians understand the true state of the nation to enable them to adjust themselves to fit into the current state.

An entrepreneur, Mr Justice Phinehas Gyesi, said he was concerned about policies that the government would come up with to help develop Ghanaian-owned businesses.

A student of the University of Health and Allied Sciences, Mr Abdul-Rasheed Awinpang, was concerned about unemployment, which he said was a major threat to national security.

To address the situation, he said the government must come up with policies to create permanent and well-paying jobs for the people.

He also observed that corruption continued to cause havoc in the country, while the government’s fight against the canker had been abysmal.

It was, therefore, his expectation that President Akufo-Addo would disclose to Ghanaians efforts being made to resolve the unemployment situation.

A counseling psychologist, Mr Samed Soochi, said Ghana was not achieving its economic growth due to reasons, including the high rate of corruption, high cost of living and over dependence on western countries for assistance.

It was his expectation that such issues would be addressed today.

Today’s SONA will be delivered outside the chamber of Parliament in a giant marquee mounted at the car park at the forecourt of the State House.

The relocation into the large tent is to create a bigger space than the chamber of Parliament to accommodate the few dignitaries and invited guests, including accredited media houses, who are to be physically present at the venue.

Among the tall list of priorities anticipated to be highlighted by President Akufo-Addo are the COVID-19 pandemic and the ongoing vaccination exercise, as well as all the other measures instituted to overcome the pandemic.

The President is  also expected to provide an update on vaccine procurement, arrival and roll out.

In his last address, President Akufo-Addo had announced that the pandemic threatened to derail the gains chalked up over the first three years of his administration and its impact, which had led to the revision in the GDP growth of the country for 2020 from 6.8 to 0.9 per cent and later 1.9 per cent, which he indicated reflected a significant slowdown in economic activities as a consequence of the effects of the COVID-19 on lives and livelihoods.

The President, who has been leading the nation’s fight against the pandemic, will brief the House on how well Ghana managed the pandemic before the second wave and the measures he had instituted to forestall any devastating outcomes.

What will definitely not escape mention is the fact that Ghana was the first country in Africa to benefit from vaccines under the COVAX initiative.

There is the likelihood that the President will put out the various policies, programmes and strategies of his administration to revitalise the economy.

He will touch on the support given to households and the private sector, especially industries, to withstand the pressures of the pandemic.

In his fourth SONA, the President highlighted a number of  things, including the vote of confidence in the economy by the international community, the setting aside of GH₵5 billion by the government to pay customers of microfinance and savings and loans companies that collapsed, as well as another GH₵13 billion to pay 4.6 million customers of collapsed banks.

He is likely to address those issues.

Again, in the last address, he said food processing had provided the take-off point for the industrialisation of many nations, and that Ghana was taking that lesson to heart as it pursued the goal to industrialise, modernise and create jobs for the young people of our nation.

To that end, the effort to boost food production cannot be relegated to the background, which means that the Planting for Food and Jobs initiative will come up for mention by the President.

The thorny subject of galamsey cannot escape the lenses of President Akufo-Addo, since he has consistently stated that arresting the canker was dear to his heart.

In his fourth SONA, he had stated, among other things, that no illegal miner would be shielded from arrest or prosecution, while alternative livelihood programmes for illegal miners were ongoing in 35 districts.

Therefore, today, the President will highlight the achievements and the challenges that have characterised efforts to bring the situation under control.

It is expected that he will reiterate his resolve for an open conversation on the subject.

The free senior high school (SHS) and the Technical and Vocational Education and Training (TVET) policies are now entrenched parts of the educational set up, and it is the expectation of the government that the two policies will quicken the pace of development and give some confidence about the future prospects of the country.

On the President’s agenda, therefore, will be how to further enhance the successes chalked up under the free SHS and TVET policies and how to smoothen the rough edges, including the closing up of the infrastructure deficit, the complete elimination of the double-track system, as well as the mobilisation of funds to further improve on the policies and increase enrolment.

Technical and vocational education is key to the success of the government’s industrialisation agenda, typified in the one district, one factory (1D1F) initiative.

President Akufo-Addo will surely speak about the 2020 presidential election petition, after whose hearing the seven-member panel of the Supreme Court unanimously affirmed his victory declared by the Electoral Commission.

This is expected because in his last SONA, he recognised former President John Dramani Mahama’s decision to go to the Supreme Court over the 2020 election.

“It is good for the nation that, in the end, he [Mahama] chose the legal path, instead of the pockets of violence that have attended the rejection of the results by his party in the period after the elections,” President Akufo-Addo had stated.

A sports enthusiast, President Akufo-Addo will not hide his excitement and the gratitude of the nation to the Black Satellites for winning Ghana’s fourth AFCON Under-20 trophy.