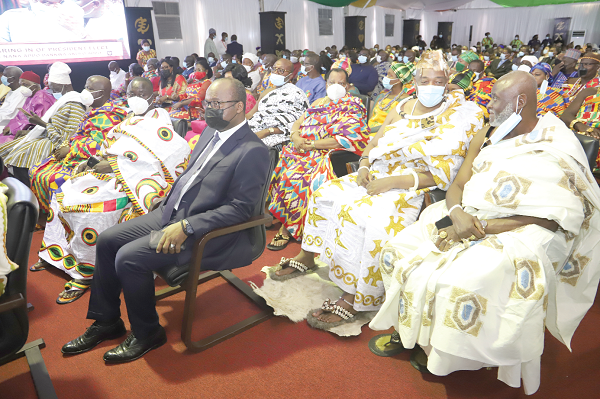 • Some traditional rulers and dignitaries at the event
30.5k Shares

On a historic day for Ghana's political governance when the Speaker of Parliament was the elected choice of the opposition party, President Nana Addo Dankwa Akufo-Addo and his vice, Dr Mahamudu Bawumia, took their oaths of office for a second term in the confined space of Parliament House in Accra yesterday.

The event was without the drawn-out and elaborate fanfare that had characterised the previous seven swearing-ins of Presidents-elect.

The all-important event was also without the public participation of usually overjoyed grass-roots party faithful.

For many who saw the swearing-in of the President as a public event full of merrymaking, the coronavirus disease (COVID-19) pandemic, as well as  the desire of the leadership of Parliament to make it strictly a business for the Legislature, posed some restrictions.

Former President John Agyekum Kufuor, the wife of the late former Vice-President Aliu Mahama, Hajia Ramatu Mahama; a former Speaker of Parliament, Mr Begyina Sekyi-Hughes, as well as representatives from the UK, the US and Zambia were also in attendance.

The investiture took place before Parliament on the precincts of Parliament House and the flavour put on display was far more than a political showpiece.

Ghana's culture was in full glare in the colourful Kente, smock and other traditional clothing, local music and dance displays, traditional royalty and the orderly mix of tradition and contemporary culture.

That was best captured in the appearance of President Akufo-Addo in a grey slim-fit suit, while Dr Bawumia wore a flowing white 'agbada'.

Both were accompanied by their wives, Mrs Rebecca Akufo-Addo and Mrs Samira Bawumia, respectively, the extroverted partners with growing influence in local politics.

The 75 minutes of the investiture covered the introduction of dignitaries, oath-taking, the President's inaugural speech, an address by Guinea's President Condé and a cultural display on the outer compound.

The ceremony was, perhaps, one of the briefest of any such event in the country’s contemporary history.

The new Speaker of Parliament, Mr Alban S. K. Bagbin, was in the saddle, and the experienced former legislator for Nadowli-Kaleo in the Upper West Region was a competent manager who directed the big stage with an authoritative hand.

His humour-laced utterances provoked intermittent laughter, while the oath-taking sessions were expressed in full joy with cheers.

Under the instruction of the Speaker, the leadership of Parliament and the key administrators of the legislative arm of government welcomed the President and the Vice-President at the Foyer of Parliament and ushered them into the main Chamber, where those in attendance were not only the elected parliamentarians.

The scheduled arrival of the President and the Vice-President was more than two hours behind schedule as a result of the protracted parliamentary processes in the election and swearing-in of the Speaker and his two deputies.

The foremost gentlemen had arrived in small separate motorcades, with hardly a whimper of a cheering crowd along their route, as the Constitution Day, marked as a holiday, had reduced any chances of the normal heavy traffic on Accra's streets.

The heavy security presence within the immediate environs of the Jubilee House and Parliament House, in addition to the road closures along some link routes, cut off the public from what used to be a public show in the past.