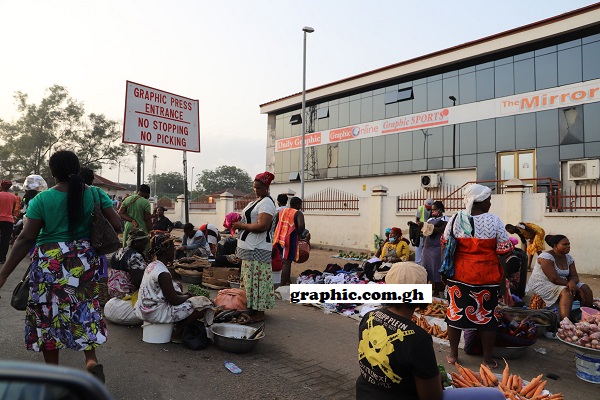 Traders and hawkers spill over onto the pavement and street in front of the Graphic Press House. Pictures: GABRIEL AHIABOR
30.5k Shares

Traders in markets within the central business district (CBD) of Accra have extended their activities towards the Graphic Road, taking over the pavements from the Graphic Press and the inner perimeter around the Beyeeman Cold Store.

Some traders with secure trading areas within designated parts of the metropolis and those without are vigorously trading at unauthorised locations on the Graphic Road.

As part of the Daily Graphic’s national sanitation campaign effort, it observed over a period of three days this week that traders and hawkers had taken over pedestrian walkways in the markets, the frontages of the Greater Accra Regional Fire Service at Makola, the Accra Central Police Station and the Republic House branch of the GCB Bank.

At the CMB Market, not only had the traders invaded the pavement in front of the SSNIT district office; they had also extended their encroachment westwards towards the Graphic Road.

Again, at the Kwame Nkrumah Interchange, wide areas of pavement had been reduced to single-lane footpaths as a result of the activities of traders.

Among the items sold on the pavements were clothes, shoes, bags, cosmetics, food and beverages, sanitary products, jewellery, herbal medicines and cooking utensils.

The areas where the nuisance is predominant include the CBD, the Adabraka Market, the Agbogbloshie Market and the Madina Market.

The Accra Metropolitan Assembly (AMA) Byelaw 2017 2 (a) on Obstruction in Public Pathway states that a person shall not park a vehicle, goods or items in a public pathway or pavement.

Amidst the chaos, there was also indiscriminate disposal of waste on the pathways and sections of the streets.

On the roads, traders jostled dangerously with motorists and pedestrians for space, with all the attendant dangers to lives. 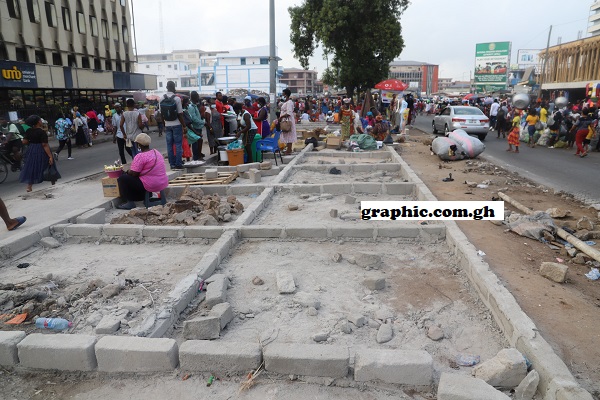 Who is behind this development in the median on the Kwame Nkrumah Avenue leading to the Kantamanto Market?

Strikingly, an early morning market had sprung up on the Graphic Road where many traders sold their wares.

The traders, including fishmongers, came from coastal communities outside Accra, including Senya Beraku, Winneba, Biriwa, Mankessim and Takoradi.

They lined up under the traffic light leading to Kantamanto, as well as the entrances to the Graphic Press House.

In their hundreds, the traders sold fish, second-hand clothes, electronic gadgets, fruits and vegetables, among other items.

The real business buzz at the market began about 4 a.m. when the buyers began to arrive.

Although revenue collectors of the AMA start work at 8 a.m., some men who claimed to work for the city authority were seen as early as 5 a.m. taking levies from the traders without issuing receipts to them.

In spite of the fact that the official AMA market toll is GH¢1, levies collected from the traders ranged between GH¢3 and GH¢5, depending on the quantity of items being sold.

Most often, the market closed at 8 a.m., when the traders swept the streets.

Majority of the traders who spoke to the Daily Graphic said they could not afford the exorbitant rent charges for shops and sheds in the markets.

Others said they were forced onto the streets due to past incidents of fire outbreaks in the markets.

A fish seller at the CMB Market, Naa Okailey, said she had tried many times to secure a shop but to no avail.

She said she previously owned a shop at the Odawna Market, but as a result of the displacement caused by a fire outbreak, she had to find another shed to carry on with her business.

“I am ready to pay to get a shop, but the assemblies are making it difficult for me. They keep telling me the markets are full, but day in, day out, I see new occupants,” she said.

A fruit seller at the Kwame Nkrumah Interchange, Madam Augustina Sarfo, also attributed her situation to the high cost of securing shops in Accra.

“I used to own a container shop at Lapaz, where I was doing my business, but later the assembly came to decongest the area and that affected my shop. I have, since then, been trying to get a shop in the market, so that I don’t go through that experience again, but the cost is way higher than I imagined it to be,” she said.

Meanwhile, the Greater Accra Regional Minister, Mr Henry Quartey, has started a crusade against indiscipline, beginning with meetings with stakeholders and identifiable groups in the city to help find a way out.

At a meeting with market queens last Thursday, Mr Quartey asked for their cooperation and urged all traders on the streets and pavements to move back to the designated places within the markets or face the full force of the assembly and the security agencies.

He said there would be a two-week intensive public education by the Information Services Department in the major streets of Accra to advise traders to stay off the streets.

“There is no intention at all to make this exercise Rambo-style or bring hardship to the market women or traders; we only want them to move off the streets and carry on with their businesses in the designated marketplaces.

“We are beginning this exercise using a human face, where interactions are going to take place between the assemblies and the traders. However, if the latter continue to make it difficult for us after the engagements, we will get the assemblies to enforce the local bye-laws,” Mr Quartey added.