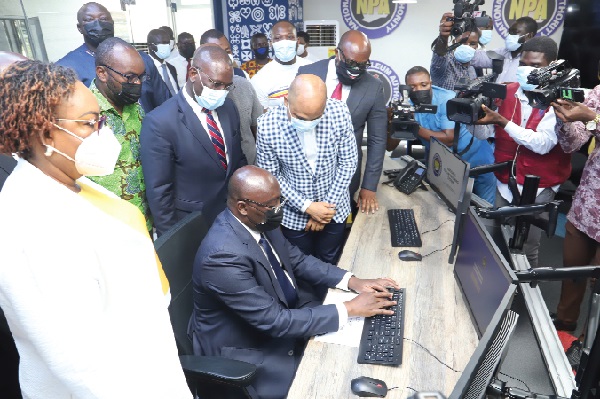 The directive by the Vice-President, Dr Mahamudu Bawumia, comes on the back of losses incurred by the NPA through such nefarious activities by some petroleum product dealers.

Dr Bawumia, who was speaking at the launch of a new National Retail Outlet Fuel Monitoring System introduced by the NPA in Accra yesterday, noted that between 2015 and 2019, the government lost GH¢4.7 billion in tax revenue as a result of illegal activities in the petroleum sector.

He said taxes and levies on petroleum products were major sources of revenue for the government to pursue its developmental agenda.

Mostly, the heavily indebted OMCs are not in good standing, as they have evaded the payment of either statutory levies and/or margins.

The practice referred to as third-party deliveries, comes about when OMCs which are indebted to the Ghana Revenue Authority (GRA) resort to other OMCs that are in good standing with the GRA for supplies of petroleum products.

By engaging in unauthorised third-party deliveries, the OMCs circumvent their indebtedness to the GRA and continue to do business.

The Vice-President said the actions, decisions and policies of individuals and corporate bodies which resulted in petroleum product distribution leakages and associated revenue losses to the state had serious negative effects on the developmental agenda.

He, therefore, asked the NPA to, in addition to collecting its margins, have read-only access to the accounts held by the GRA on petroleum downstream revenue.

The Vice-President said the read-only access would enable thorough reconciliation and validation of stock movement, as well as all related financial data.

Dr Bawumia called for the synchronisation of the credit cycles adopted by the two institutions, since that would help minimise the variance between tax due from NPA's sales and the actual collections or receipts reported by the GRA.

Dr Bawumia praised the NPA for leveraging technology to improve efficiency and effectiveness in the distribution of petroleum products, which he said would also help the government maximise revenue mobilisation.

He said the government had resolved to digitise the economy to ensure effective revenue collection and accountability and, therefore, would support fully any state agency and initiative which would push forward the digitisation agenda.

The National Retail Outlet Fuel Monitoring System is an automatic tank gauging and forecourt transaction control system introduced by the NPA to deal with disputes between tanker drivers and fuel station dealers.

It is to help improve efficiency and profitability in the petroleum downstream, as well as block leakages in the sector.

This is because the new system facilitates the calibration of about four tanks within two hours, a process which, hitherto, took 24 hours to be carried out for a tank.

For instance, it records the volume of product receipts into the underground tanks, both under ambient conditions and volume corrected, to 20 degrees celsius.

Touching on the distribution of premix fuel, which he said was one critical area of concern to the government, Dr Bawumia noted that the huge subsidies on premix fuel made it attractive for people engaged in illicit activities to divert the product to retail outlets.

He said the government was extremely concerned when subsidised premix meant for fisherfolk to enhance their economic activities and improve their livelihoods did not get to the right destinations.

As part of its efforts to sanitise the distribution of premix and the management of the associated subsidies, the Vice-President said, the government, in 2018, launched a process to digitise the distribution of the product and expressed delight that the NPA was already working to extend the new fuel monitoring system to the various landing beaches.

The Minister of Energy, Dr Mathew Opoku Prempeh, urged the NPA and its other stakeholders to endeavour to improve the growth and sustenance of the sector.

He was not happy about the dishonesty among some workers within the sector and asked that all fuel dealers be enrolled on the new system.

He further said the system would ensure profitability for the industry and its players and advised the NPA to strive for excellence at all times.

The Chief Inspector of the NPA, Mrs Esther Anku, said the implementation of the price liberalisation policy in July 2015 had brought about keen competition among petroleum service providers (PSPs), resulting in a price war.

That, she explained, had led to some PSPs resorting to illicit activities in order to stay competitive in pricing.

Mrs Anku mentioned some of the key supply and revenue leakage avenues as the shores of Takoradi, Tema, Prampram, Aflao and Ghana’s main ports in Tema and Takoradi, indicating that “the volumes of petroleum products recorded through authorised structures dropped from 3.528 million tonnes in 2015 to 3.329 million tonnes in 2016”.

“Aside from the technological interventions, the authority has also been collaborating with the security agencies in the fight against the illicit activities in the industry, which have contributed to the steady increase in product consumption recorded through official channels from 3.329 million tonnes in 2016 to 4.433 million tonnes in 2020,” Mrs Anku pointed out.