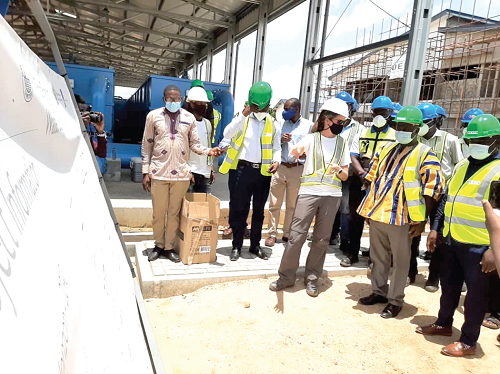 Construction works on a new water treatment plant at Tono in the Kassena-Nankana municipality in the Upper East Region will be completed this month, contractors working on the project have said.

The project is expected to start delivering potable water to homes by September this year.

This came to light when the Deputy Minister of Sanitation and Water Resources, Mr Amidu Issahaku Chinnia, and the Upper East Regional Minister, Mr Stephen Yakubu, paid a working visit to the facility last Tuesday to inspect progress of work.

The Project Coordinator, Ms Annelies De Beule, who briefed the ministers, said additional rehabilitation works would begin on the Vea Water Treatment Plant in the Bongo District in October this year.

The Tono Water Treatment Plant is a €39-million project started in September 2018. It is being financed with a loan from the ING Bank of Belgium and the Dutch government through the ORIO funding.

The project is being executed by Denys Engineers and Contractors BV, and it is given 36 months for completion.

On completion, the facility will ensure sufficient provision of potable water for over 30 major communities and about 350,000 households within its catchment area.

Ms De Beule said the handing over of the first phase of the water treatment plant would be done in October.

“The main transmission lines from Navrongo through Bolgatanga, Tindomologo to Paga, a total of 67 kilometres, have been completed and 18 kilometres of distribution lines have been installed under this phase,” she stated.

She said an elevated reservoir in Navrongo with the capacity of 600 cubic metres and existing reservoirs had also been rehabilitated.

The project coordinator explained that the second phase of the facility also comprised nine kilometres of transmission lines to Zuarungu in the Bolgatanga East District and its environs.

There is also an upgrade of the water connection to Bongo with 53 kilometres of distribution lines, an elevated reservoir at Zuarungu with a capacity of 400 cubic metres and the installation of water connections to 4,800 houses.

Touching on the Vea Water Treatment Plant at Vea, which was established about 70 years ago, Ms De Beule said rehabilitation works on the project were supposed to be part of the first phase.

“The rehabilitation of the Vea Plant was part of the original scope of work, but if we had rehabilitated that alongside the Tono Plant, it would have meant that the people of Bolgatanga would have less water. We did not want them to be deprived of water, and that is why we have scheduled to start work on it in October, after the opening of the Tono Plant,” she explained.

Mr Chinnia, who is also the Member of Parliament for Sissala East in the Upper West Region, expressed satisfaction with progress of work and urged the contractor to ensure completion on schedule.

Mr Yakubu, for his part, said when the project was fully executed, it would also address the water challenge in many communities, especially Bongo, which has high fluoride content in water.

He noted that the project would equally contribute to the achievement of Sustainable Development Goal Six (SDG 6).