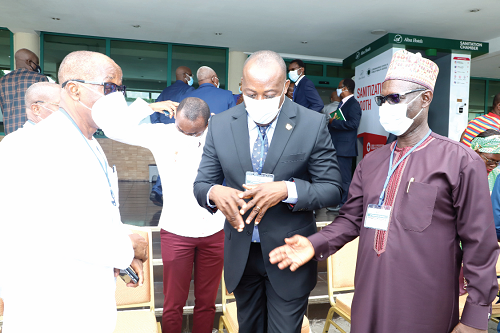 The Board Chairman of the Ghana Audit Service, Professor Edward Dua Agyeman, has called on auditors general in West Africa to remain independent and conduct their duties religiously to provide assurance of the prudent use of public funds.

He said it was also the role of an auditor general to ensure that auditors in public practice remained independent and worked for the benefit of the citizenry by ensuring that government officials spent public resources responsibly.

Prof. Dua Agyeman made the call at the second meeting of the ECOWAS Association of Supreme Audit Institutions (ECASAI) in Accra yesterday.

The ECASAI is the regional body of all the auditors general of ECOWAS member states, formed in 2019 to provide a platform for deeper cooperation among auditors in the subregion.

Prof. Dua Agyeman, who is a founder member of the continental body of auditors out of which ECASAI was carved, noted that such associations were necessary because they provided the right fora for peer reviews and collaborations.

Such collaborations, he added, would help build the capacities of all the auditors general in West Africa and boost their confidence to remain independent in the discharge of their duties.

The President of the Community Court of Justice, ECOWAS, Justice Edward Amoako Asante, who was also addressed the participants, urged members to make a collective commitment and effort at inception to make genuine contributions towards the success and sustenance of the association.

“It is important to remind you that an association is only as strong as the individual members, and its success or failure is dependent on the extent to which there is a collective commitment to the pursuit and defence of its interests,” he said.

A Deputy Minister of Foreign Affairs and Regional Integration, Mr Thomas Mbomba, assured participants at the meeting of the government’s commitment and support to the establishment of the association.

“Ghana fully supports the establishment of ECASAI and is pleased with the steps taken by this august body to develop its foundational documents, tools and a work plan to fulfill the vision of promoting good governance in ECOWAS member states.

“We understand, from the agenda of this meeting, that these documents will be concluded. We highly encourage you to do so,” he said.

Mr Mbomba said Ghana was pleased by the support provided by ECASAI members in seconding staff to the Office of the Auditor General (OAG) in Ghana to carry out audits on behalf of the country.

“This has contributed to the delivery of the OAG Audit Plan and also the development of the capacities of both OAG and ECASAI staff, while saving the community the cost of maintaining a high number of permanent staff.

“We believe that this will improve accountability and transparency in the use of community resources in the implementation of national and regional projects, with the aim of improving the living standards of ECOWAS citizens,” he said.

The acting Auditor General, Mr Johnson Akuamoah Asiedu, in an interview with the Daily Graphic after the meeting, noted that the association, which is represented by all ECOWAS member states, held its first meeting in Accra in May 2019 to, among other things, network and provide assistance for one another for the improvement of good governance.

He said although the association was still young, there were indications that it would be of good service to citizens in the sub-region.

Mr Asiedu explained that the second meeting would focus on reviewing the constitution of the association and how to deepen cooperation among member states and provide technical assistance to support one another.