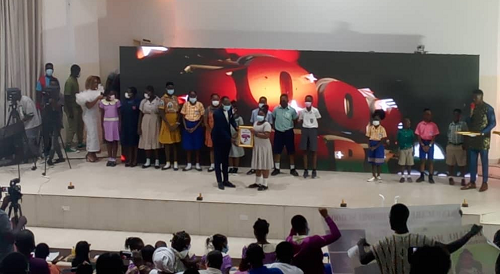 The 15 finalists receiving their certificates

The initiator of the televised reading competition and reality show, Bookworm, Mr Nelson Kofi Poku, has hinted that his outfit is hatching plans to extend the reading reality show to all regions in the country.

That, he said, will help to inspire reading culture in Ghanaian children, particularly those in the basic schools.

He said reading forms the bedrock of any successful academic journey, hence the need to inculcate the practice in Ghanaian.

Mr Kofi Poku, who is also the Chief Executive Officer of Bookworm Consult, in a media interview after the end of season three of the Bookworm contest, noted with concern that the inability of many Ghanaian pupils to read properly and with understanding was worrying and needed to be addressed immediately.

Bookworm competition allows children the opportunity to showcase their reading and comprehension skills. Winners are selected based on judges’ score and public votes.

The third season which started in June this year, received more than 100 forms applications, out of which 55 students were selected for the season. A total of 15 students made it to the final round of the contest.

Mr Nelson Kofi Poku, said he conceived the idea to start the event during the COVID-19 pandemic which disrupted academic work, particularly for the basic school students.

“It started during the COVID-19; after I realised all the children are at home and then all the government policies by then was in favour of the Senior High Schools so I decided to start this initiative to teach the children through entertainment,” he explained.

He has, therefore, appealed to the public, particularly corporate bodies and the government to come onboard in sponsoring the event so that it can be extended to all the regions in the country.

All the 15 finalists were given certificates whilst the winners in each category received tablets, books, certificate, as well as insurance package and bank account from Planet and Republic Bank respectively.