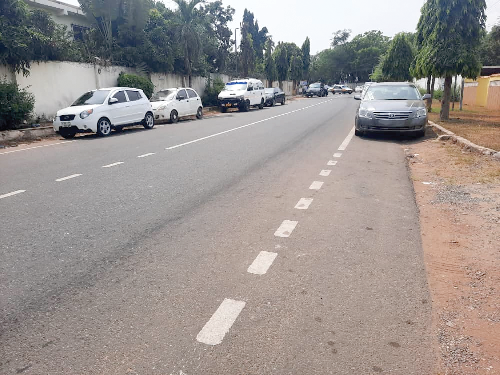 • Some vehicles parked at one of the ‘illegal’ garages
30.5k Shares

Tension is rising between residents of Tesano, a suburb of Accra, and some car dealers who have turned roads in the community into sales points for used vehicles.

The registered garages are complaining that the irregular dealers are not registered, do not make statutory payments such as taxes and, therefore, sell their cars at rock-bottom prices, but residents have accused the new car dealers of nuisance, alleging that they sometimes park their cars at residential entrances and also litter and dirty the environment.

Ultimately, the new dealers have been accused of taking advantage of the presence of four registered garages, including De Georgia Motors Limited and Aniropa Autos Limited, to lure customers to patronise their stock.

A Daily Graphic team, which monitored activities in the area for two weeks, observed that the car dealers usually parked the cars on sale along the interlink roads in the community from the early hours of the morning into the night.

Some of them speed briskly on the roads in the afternoons, usually for test drives, to assure customers of the condition of the car.

The spokesperson for the Tesano Residents Association (TRA), Mr Mike Eghan Jr, told the Daily Graphic that aside from the inappropriate parking of cars along the roads and in front of houses of residents, there were occasional fights and arguments among the dealers which created so much noise and had turned the area into a commercial hub.

"There are also traffic hazards, blocking gateways and access, people hanging around watching our every move, and the rubbish they create, while others use the bushes around as toilets," he said.

He said the residents had been fighting the car dealers for years, but added that the inability of the authorities to stop the activities of the unregistered garages had rather emboldened them to expand.

The residents, Mr Eghan said, had involved the police, the local assembly, and petitioned the office of the Member of Parliament (MP) for the area, but temporary measures taken in the past to stop the activities of the car dealers had proven futile.

The Tesano Divisional Commander of the MTTD, Deputy Superintendent of Police (DSP) Francis Aboagye, told the Daily Graphic that the police had made many attempts to stop the “illegal” activities of the car dealers, including arrests, confiscation of some cars, prosecutions and resultant court fines.

To help resolve the situation, he said, the police would soon launch a massive operation to clampdown the illegal activity.

"That place is a residential area, and they have no right to park their cars in front of people’s houses to sell and make profit at the inconvenience of residents.

“It is an offence to sell cars on the pavement. As a result of that, car owners should be careful when dealing with such car dealers to help reduce accidents and criminal activities,” he said.

The Municipal Chief Executive (MCE) of the Okaikwei North Municipal Assembly, Mr Boye Laryea, also told the Daily Graphic that the activities of the car dealers were a nuisance in a first-class residential area.

He said on his assumption of office in 2017, the assembly noticed the menace caused by the activities of the car dealers and proceeded to engage all the stakeholders in the community to find a solution to the issue.

“We came into an agreement, and the TRA was supposed to help in getting barricades for the area, but the residents went to sleep after we drove the dealers away, so I didn't think it was wise to keep using the assembly's funds to keep driving them away,” he said.

Beyond the lack of support from the residents, he said the dealers on some occasions threatened to kill him if he continued the clampdown exercise.

“We did a lot to the point that they said they would lynch me if I ever stepped there again, but what I am saying is that the residents association also did not help themselves because the place could be turned into a gated community, and that is allowed,” he said.

“Very soon, this activity will stop, and they have to be ready for the action ahead. They are spoiling the road, creating rubbish and some people are even pounding fufu on the shoulders the roads in the community. It’s unacceptable,” he said.

Reacting to the situation, one of the managers of the official garages, who only gave her name as Anita, said the activities of the “squatter” car dealers were having a negative effect on her business and those of the other registered garages.

“Some people even think that we are the ones who have allowed them to come around or they are working for us, but we don’t even know most of them, and their activities are rather spoiling our market,” she said.

“They are violent people and they engage in all sorts of illegal activities,” she said.