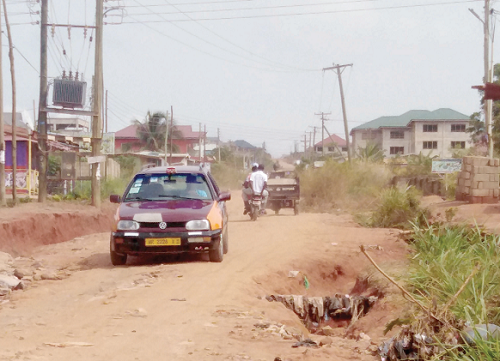 A deep gully on the side of the road at Red Top in the Ga South Municipality
30.5k Shares

The Ga South Municipal Assembly has disclosed that work on the six-kilometre Oshiyie Red Top Road (Ajasco-Sea View to West Hills Road) will start at the end of this month.

The road is the shortest route motorists use to connect to the West Hills Mall and its environs from Kokrobite, Oshiyie, Bortianor and New Aplaku and surrounding areas.

With the rains starting soon, residents have stepped up their appeal for the road to be constructed and completed on time.

The road has been in a bad state for years. When a team from the Daily Graphic went on the road last Sunday, it found it full of potholes.

The laterite covering on the road had been washed off, leaving its gravel base exposed. Deep gullies had also developed on both sides of the road, with bridges at some sections almost collapsing.

In fact, that road has become so narrow that it is now difficult and time consuming to travel the short journey from any of the localities to the mall.

A taxi driver who plies the route, Mr Enoch Nii Darku Rideiro, said considering the current state of the road it would be difficult for both motorists and pedestrians to travel on it when the rains start.

He said because of its bad nature, drivers had refused to ply it any longer for fear of damaging their vehicles or getting them stuck in mud.

When the Daily Graphic got in contact with the Ga South Municipal Road Engineer, Mr Daniel Sowah, he gave an assurance that work would soon start on the road.

He said the road was given on contract last year and the contractor, Teresil Company Limited, was currently mobilising funds to come to site this month.

According to Mr Sowah, the contractor was in the meantime shaping up some parts of the road for work to commence.

He said the road construction work was being funded by the government and expected to be completed in two years.

Other roads assembly is working on

He said other roads in the municipality, including the one from American Farms to Tomefa and the streets in Amanfrom, had also been awarded on contract and the contractors were expected to move to the sites soon.

He added that the assembly had projected to reconstruct an additional 20 kilometres of roads this year. Among the areas in the municipality where roads are to be rehabilitated are Tuba, Brigade, Kuwait, Galilea, parts of Bortianor and Fulani leading to Kokrobite.

Mr Sowah said the assembly was awaiting Parliament’s confirmation of the minister designate for Roads and Highways to send their projections to him for approval.

He expressed the hope that the roads in the municipality would be put in good shape to encourage residents to pay their taxes and levies, including property rates, willingly.

He stated that the assembly had recently used its internally generated funds to grade several roads in the municipality in areas such as Obom, Honese, Hobor, Maame Dede, Ammoman, Kofi Kwei, Domeabra, Amuzokope, Masalachi and Tebu.

He said because road construction was capital intensive, it was the central government that financed it, adding that what the assembly did was to rehabilitate the roads by grading and shaping them to make them passable.

The Ga South Municipal Engineer disclosed that it cost the assembly about GH¢100,000 to grade about 10 kilometres of road.