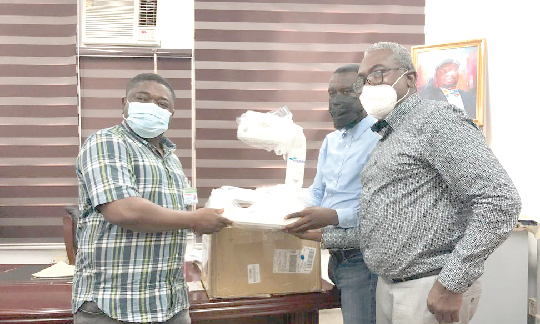 The equipment, described by the hospital as critical in emergency healthcare delivery, will facilitate the operations of health workers at the facility and help prevent fatalities that occur due to delays in finding patients’ veins for infusion or intravenous cannula.

Infrared vein finders are devices used by healthcare providers to increase the chances of locating veins in the arms. The ultraviolet light from the vein finder reflects to create a map of the veins.

At a ceremony yesterday to present the equipment, the Country Sales Manager of Sysmex, Mr. Mustapha Abari, said the company was aware of the difficulties medical personnel often went through in finding the veins of patients for treatment.

He said Sysmex presented the equipment to the hospital because it saw human life as being more important than everything else.

“Seeking a vein is a basic practice among medical practitioners across the world, especially during emergencies, as it could be the defining moment between life and death in critically ill patients,” he said.

He said using the right equipment in such situations would mitigate the challenges that most facilities went through during therapy.

Mr. Abari said the world was developing at a faster pace with technology, making the equipment necessary in all healthcare facilities to save lives and also ease pressure on health workers.

Sysmex, he said, had been working with many health facilities and was looking forward to supporting them with more advanced technological equipment to keep the healthcare facilities running.

He said medical teams at the Emergency, Paediatric and Obstetrics units sometimes found it difficult to locate the veins of patients during processes of therapy.

“It is sad to say that in some cases, it becomes a struggle for medics to find a vein and the patient dies, unfortunately,” he said.

He said with the vein finder, it would be easy to locate veins on patients who reported at the hospital with collapsed veins and those who had lost blood and needed urgent attention, as well as patients who were dark in complexion and those who were obese.

"Healthcare workers in Ghana are as good as those in the USA, Cuba, the UK and other places, but without the right equipment, their performance will always be underestimated. We really commend Sysmex for its generous support,” he added.

The Effia-Nkwanta Regional Referral Hospital, Dr. Tambil said, would soon see a major facelift that would move it from its current state to a tertiary status.

He said governments, past and present, had shown a commitment to develop the country’s health sector, adding, however, that the government could not do it alone “unless with support from companies such as Sysmex”.

He said the hospital would still need more of the vein finder equipment for other units of the hospital for their individual use.

“We have had discussions to procure some for all the units, but we will be glad if we can have more of them through corporate support,” he said.