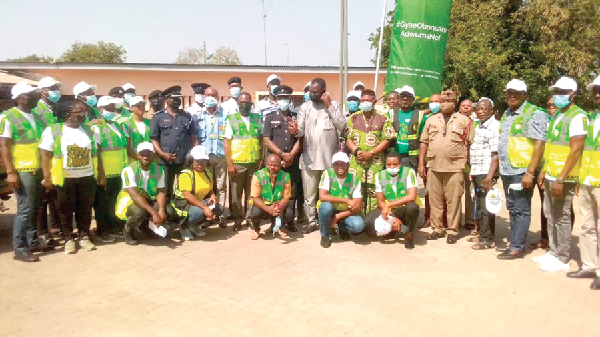 The National Road Safety Authority (NRSA) has officially launched its 'Stay Alive' campaign in the Volta Region in a bid to reduce road carnages in the country ahead of the Yuletide.

The campaign, being run with the tag-line 'Stop the devil's work', is an offshoot of a similar one dubbed 'Arrive Alive' which was launched last year as a pilot to test the ground.

The Stay Alive campaign will spread its tentacles to all stakeholders, with officials working closely with about 220 media entities in a bid to drive education and sensitisation on road safety.

Speaking at the launch in Ho, the Director of Planning and Programming, NRSA, Mr Osafo Adonteng, said the figures recorded on road crashes in the country between 2020 and 2021 were unacceptable.

Mr Adonteng said "comparatively, road crashes are the deadliest and we must tackle that menace. It is not a one-man business, hence we must work collectively and all of us must be advocates. There is a clear indication that the level of indiscipline is too high, and drivers are being irresponsible; despite clear road signs, drivers still drive beyond speed limits and are consumed by alcohol while driving."

He said the alarming figures called for the tackling of road crashes from the grassroots.

The Police, he said, had the mandate and responsibility to enforce the law to the fullest.

Mr Adonteng advised drivers to minimise their speed and not to compete with speeding traffic on the road and respect road traffic regulations for the safety of Ghanaians.

He called on the Ghana Highway Authority to critically fix road signs, traffic lights and streetlights that would help pedestrians and drivers to responsibly use the roads.

The Volta Regional Minister, Dr Archibald Yao Letsa, in an address to officially launch the campaign, said the efforts of the NRSA were invaluable and could not be taken for granted and as such needed the support of all.

"There is an utmost need for all of us to lend the necessary support and push these efforts of ensuring that we reduce drastically the cases of road accidents in the country and more importantly in the Volta Region,” he said.

Touching on the regional figures recorded from 2019, Dr Letsa patted the regional NRSA on the back for their efforts in the reduction of road incidents between 2019 and 2020.

"When road crashes data recorded in 2019 and 2020 are compared, it will be realised that the NRSA, Volta Regional office and road users as well as stakeholders in road safety management are doing something right.

"That notwithstanding, they can do better, and should, therefore, be given all the assistance and support they deserve," Dr Letsa added.

He observed that the roads were at their busiest with heightened anticipation of the Christmas festivities, which called for extreme caution in their usage.

He cautioned road users against speeding, wrongful overtaking, over loading, drink or tired driving, non-wearing of seatbelts and crash helmets, among others.

The Regional Director, NRSA, Mr Kwesi Yirenkyi, described the campaign as one of the best interventions of the authority which sought to lessen road incidents attributed to 90 per cent human error.

He said it would involve vigorous education of drivers and other road users on road safety and other measures in order to reduce road incidents by 15 per cent.