Ghana to start joint fisheries observer programme with other countries 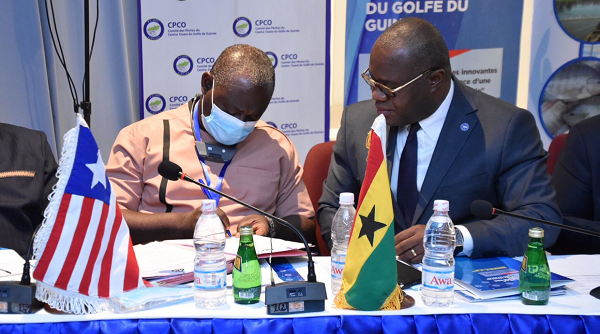 The Chief Director of the Ministry of Fisheries and Aquaculture Development, Mr Eric Kwesi Armo-Himbson (left) signing the pact. Looking on is the Secretary General of FCWC, Mr Seraphin Dedi Nadje. Follow @Graphicgh

Ghana has signed a pact with three other countries in the ECOWAS region to start a joint fisheries observer and monitoring programme in 2022.

The three countries are Togo, Benin, and Cote d'Ivoire. Cote d'Ivoire, however, did not sign the pact during the moment Ghana, Togo and Benin signed it.

The joint observer programme is aimed at ending Illegal, unreported, and unregulated (IUU) fishing practices in the ECOWAS regions bordering the seas, known as Fisheries Committee for the West Central Gulf of Guinea (FCWC).

The signing of the pact took place during the closing ceremony of the 13th Session of the Conference of Ministers of the Fisheries Committee for West Central Gulf of Guinea (FCWC) in Abidjan, Cote d’Ivoire, on Friday, December 17, 2021.

The FCWC exist among other things to enhance governance capacity through sub-regional and regional cooperation, particularly in respect to developing and implementing appropriate management frameworks that ensure fisheries resources are harvested sustainably.

He observed that the FCWC region lose a lot of money through the activities of IUU fishing annually, a situation he expressed optimism, could be dealt with if all FCWC member states worked together.

He said the FCWC programmes focused on the coordination, development and implementation of national and regional fisheries plans that were coherent with the African Union’s integration agenda and in support of the objectives of the United Nation’s sustainable development goals.

Mr Sedi was of the view that FCWC region’s fisheries sector could be developed to accelerate growth and better prospects if all the member states cooperate on management practices and showed commitment and political will.

For his part, a Senior Fisheries Officer at the UN Food and Agriculture Organisation (FAO), Alhaji M. Jallow, said partnerships and collaborations were key to protecting the fisheries sector in the FCWC region.

For him, adopting regional approach in fighting IUU fishing was the way to go, noting that what one country did affected the other, hence the need for all countries bordering the Gulf of the Guinea to adopt Blue Growth strategies— which is a long term strategy to support sustainable growth in the marine and maritime sectors.

Speaking on behalf of Ghana’s Fisheries and Aquaculture Development Minister, Mavis Hawa Koomson at the event, the Chief Director of the Ministry, Mr Eric Kwesi Armo-Himbson, called for more efforts to fight IUU fishing, noting that when the joint observer programme was implemented, it would help to end or minimise IUU fishing in the region.

He also called on the FCWC countries to prioritise maritime security as they prepared to start the joint regional fishing observer programme.

He further encouraged the region to look critically at developing the artisanal and aquaculture sectors to boost their economies and ensuring the region’s food security.

For him, the artisanal and aquaculture fisheries provided a lot of job opportunities for the population of the FCWC countries, hence the need to pay more attention to those sectors.

Mr Armo-Himbson also encouraged other FCWC countries to observe close season together with Ghana, explaining that when only Ghana observed the close season with its neighbouring countries still continuing to fish, it would not help to address the situation of protecting shared stocks.

For him, the only way that the declining fish stocks in the FCWC countries, particularly the shared stocks, could be reversed was for all the member states to observe a harmonised closed season.