Requirements for registration of industrial vessels to be reviewed 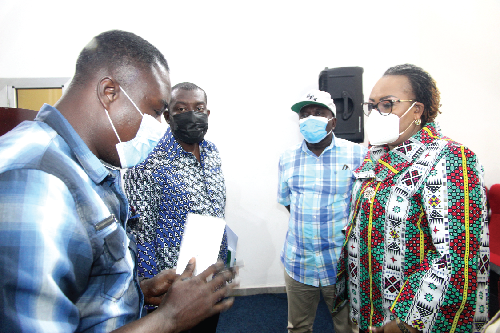 Requirements for the registration of industrial fishing vessels or trawlers are to be reviewed to seal loopholes in the operation of foreign-owned vessels in the country’s territorial waters.

The Minister of Fisheries and Aquaculture Development, Mrs Mavis Hawa Koomson, who said this in Accra yesterday, added that the review of the licensing regime was part of steps being taken to weed out “front men” or foreign “beneficial owners” from the fishing industry to prevent illegal fishing and increase revenue generation from the sector.

Mrs Koomson, who was speaking at the Ministers’ Press Briefing series, said because of the ban of foreign vessels from industrial fishing in the country, some companies were using dubious means, such as engaging in hire-purchase agreements with local entities and other special purpose vehicles, to operate.

“We are aware of their activities, and that is why we are working on the requirements for licensing and the reason industrial vessels have not been allowed to go to sea yet,”she added.

The minister also gave an assurance that the government would, this year, start the payment of the salaries of observers sent on vessels to monitor industrial fishing activities to enable them to carry out their mandate without fear or favour.

“If we have to rely on our officers, then it means the vessels would have run on shift. So they (vessel owners) decided that they would do the payment, so that they can all be at sea at the same time.

“But now we are planning to take that responsibility of paying the observers because if you have to monitor somebody and report the person, and the same person is the one paying you, then there will be difficulties,” she said.

Mrs Koomson said there was high compliance in all fishing communities during the month-long close season for fishing this year.

She, however, said there were a few incidents of infraction in some fishing communities, which led to the arrest and prosecution of five fishermen.

For instance, she said, some fishers in Elmina in the Central Region continued with illegal fishing activities, particularly light fishing and transshipment at sea, a practice known as ‘Saiko’, and, therefore, refused to accept relief items.

She said through the Fisheries Enforcement Unit of the Fisheries Commission, the Ghana Navy and the Marine Police, non-compliant fishermen were arrested in Sekondi, Benyin and Esiama (all in the Western Region).

“The suspects are being prosecuted to serve as a deterrent to others,” Mrs Koomson said.

The minister said her outfit, through the Premix Fuel Secretariat, had continued with the supply of subsidised premix to landing beaches.

“A total of 52.92 million litres of premix were supplied between January and June 2021, while illegal activities, such as premix diversion and hoarding, have reduced drastically,” she said.

According to her, the ministry also undertook mass vaccination of cage fish farms at a cost of GH¢4 million to contain the spread of fish disease in 2019.

The minister also said Ghana had been selected by the Ministers in charge of Fisheries and Aquaculture of the Organisation of African, Caribbean and Pacific States (OACPS) to host the seventh meeting scheduled for Accra from April 5-8, 2022.

It will be on the theme: “OACPS Blue Economy Agenda 2030 — Catalyzing sustainable fisheries and aquaculture development for the future”.

The meeting was instituted to facilitate the implementation of fisheries mechanism established in 2009.

“Fisheries mechanism is to reinforce the key role that fisheries and aquaculture play in the socio-economic development of member states, as well as address the challenges confronting the sector in member states.

“It also provides a platform for key stakeholders to discuss pertinent issues relating to the sector, including climate change, ocean pollution and Illegal, unreported and unregulated (IUU) fishing,” she added.