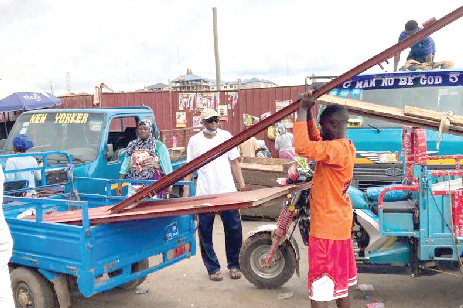 Some of the traders conveying their items in tricycles
30.5k Shares

The final batch of traders in the Kumasi Central Market have started packing their wares from the market to meet the deadline for evacuation.

The deadline of yesterday was to make way for the phase two of the Kejetia/Central Market Redevelopment Project to proceed.

The last order came from the Ashanti Regional Minister, Mr. Simon Osei-Mensah, last Friday after the traders had persistently ignored orders from the Kumasi Metropolitan Assembly (KMA) to quit.

Currently, the project is about 50 per cent complete.

At the market yesterday, some of the traders hurried through the packing process, carting their wares and belongings in trucks and cars.

Others also pulled down their structures for fear of losing their wares to the impending demolition exercise.

The traders have been given several notices since 2020, after President Nana Addo Dankwa Akufo-Addo, supported by the Asantehene, Otumfuo Osei Tutu II, cut the sod for the commencement of the project, which is expected to be completed in 2023.

Though some were initially adamant to the call to evacuate from the land with the excuse that they were not provided with temporary places to operate, they have finally agreed to move.

It was a field day for head porters, popularly known in Kumasi as ‘paa-oo-paa’, and scrap dealers, who took advantage of the situation.

The head potters were the main helping hands conveying the wares of the traders, while scrap dealers busily gathered every loose metal available at the site as a result of the demolished structures.

Some traders, expecially those who operate on top of tables and pavements and mostly on the abandoned railway line, cashed in during their last market day at the Central Market.

The KMA has already allocated shops and spaces at some satellite markets within the metropolis, including the Race Course Market and the Afia Kobi Serwaa Ampem Market, popularly known as Abinkyi Market, for traders to occupy until the new Central Market is completed.

The Kumasi Central Market is a €248 million project being financed by the Deutsche Bank of Germany, with export credit guarantee from the United Kingdom Export Finance (UKEF).

Additionally, the project will provide other essential facilities such as a waste treatment plant, a police station, a fire station, post offices, and an amphi-theatre and first-class roads in the central business district of Kumasi.