Public Services Workers Union to strike over COLA on July 19 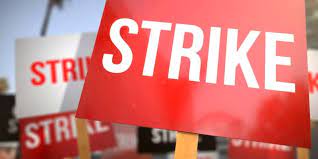 The Public Services Workers Union (PSWU) has served notice that its members will strike from Tuesday, July 19, 2022, to demand a 20 per cent Cost of Living Allowance (CoLA).

The union said industrial action had become necessary due to the worsening economic conditions in the country.

This was contained in a letter signed by the General Secretary of the PSWU, Bernard Adjei and addressed to the National Labour Commission, the Presidency, Ministry of Employment and Labour Relation, Ministry of Finance, Ministry of National Security and the Trades Union Congress.

The letter said the decision to strike was taken at an emergency meeting on July 8.

"This follows the failure of Government (Our Employer) to respond and or honour the request for payment of Cost-of-Living Allowance at 20% of Basic Salaries to ameliorate the economic hardship currently faced by members," the letter reads. 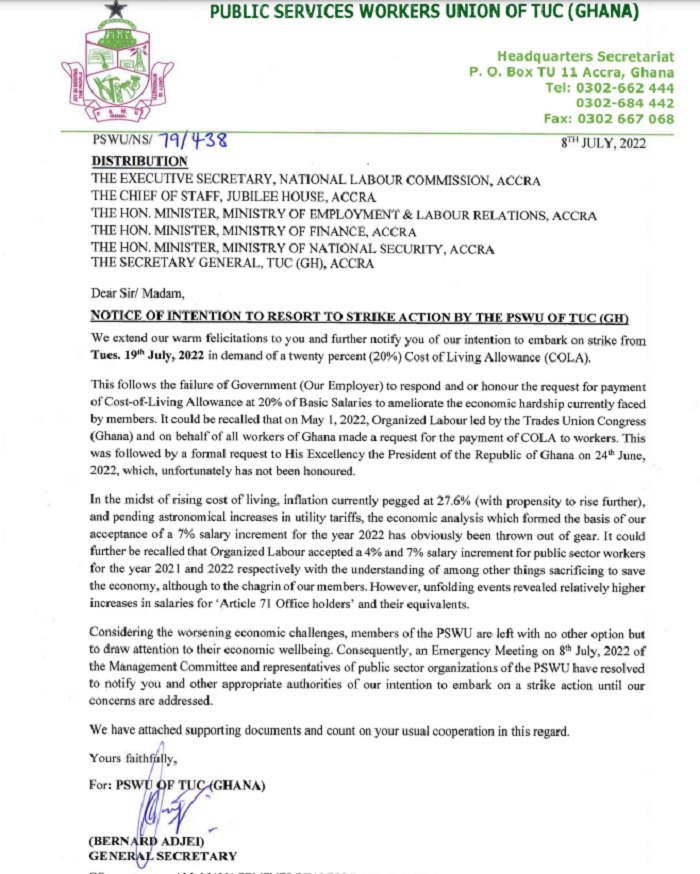 "It could be recalled that on May 1, 2022, Organized Labour led by the Trades Union Congress (Ghana) and on behalf of all workers of Ghana made a request for the payment of COLA to workers.

"This was followed by a formal request to His Excellency the President of the Republic of Ghana on 24th June 2022, which unfortunately has not been honoured".

It said its decision to accept a 7% salary increment for the year 2022 had been thrown out of gear by the rising cost of living.

“In the midst of rising cost of living, inflation currently pegged at 27.6% (with a propensity to rise further), and pending astronomical increases in utility tariffs, the economic analysis which formed the basis of our acceptance of a 1-year salary increment for the year 2022 has obviously been thrown out of gear,” the letter reads.

“Considering the worsening economic challenges, members of the PSWU are left with no other option but to draw attention to their economic wellbeing.”

Already, teachers in the pre-tertiary education sector are on strike with other groups including the Union of Professional Nurse and Midwives joining calls by some public sector workers for the government to pay them the 20% COLA allowance.

Meanwhile, the Fair Wages and Salaries Commission (FWSC) is today commencing negotiations with 23 labour unions and associations over their demands.

The meeting, which will be held at the Ministry of Health conference room in Accra, follows an emergency meeting held between the government team and organised labour on Friday, July 8, to discuss the Cost of Living Allowance (CoLA)