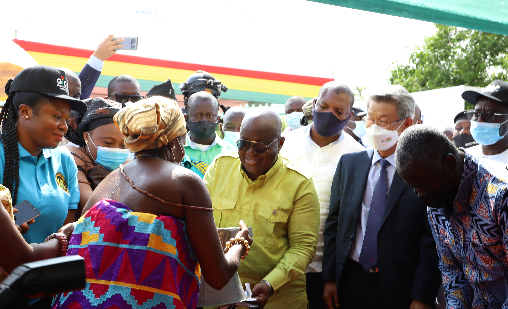 President Akufo-Addo (3rd right) handing over an improved charcoal stove to Manye Angmorkuor Yoko I (back to camera), a Development Queen Mother of Manya Krobo, at the ceremony in Akuse. Picture: GABRIEL AHIABOR

The project, funded by South Korea through a $5.5 million grant, is an initiative of the government to mitigate the adverse impact of climate change.

The initiative was launched at Akuse in the Eastern Region last Monday shortly after the President had commissioned the retrofitted Kpong hydro-power generation plant, also at Akuse.

President Akufo-Addo reaffirmed government’s commitment to the Paris Agreement on Climate Change to expand the adoption of cleaner cooking solutions by scaling up the use of liquified petroleum gas (LPG) for cooking in households.

More than 75 per cent of total energy consumed in sub-Saharan Africa was from woody biomass in the form of charcoal and firewood.

In Ghana, the President said charcoal and firewood accounted for as much as 40 per cent of total energy consumed mainly for heating and processing using very inefficient stoves.

"We cannot and should not continue cutting down without planting the God-given trees that are there to absorb the carbon dioxide we produce and in return give us oxygen to breathe,” he said.

He said he was happy that significant progress had been made, and that very soon the LPG cylinder recirculation model would be launched across the country.

“Since it will be difficult to have all households switch to the use of LPG, in the short term, our strategy is to promote the use of two million improved and efficient wood-fuel stoves as an interim measure until such time that all households eventually migrate to LPG or electricity as main cooking fuels.

“The 500,000 improved cookstoves would be distributed to beneficiary households in all the 16 regions of the country,” he added.

President Akufo-Addo said in terms of job opportunities, about 200 direct jobs had been created by the project alone in Ashaiman, Kokompe, Achimota, Kasoa, Weija, Cape Coast and Kumasi, among others, where artisans were engaged in the various components of the stoves.

He intimated that this would be scaled up to about 1,000 in the long term.

“This is just phase one. Phase two, which consists of another 500,000 units, is being developed for funding, so as to ensure that as many households as possible receive the improved cookstoves,” the President assured.

He commended the Minister of Energy, Mr. John Peter Amewu, and his deputy, Mr. Joseph Cudjoe, for making "this dream of mine a reality within a short time".

He expressed the hope that the improved stoves would check tree felling.

Mr. Amewu gave an assurance that his ministry, in collaboration with other stakeholders, would ensure the proper accountability of the project.