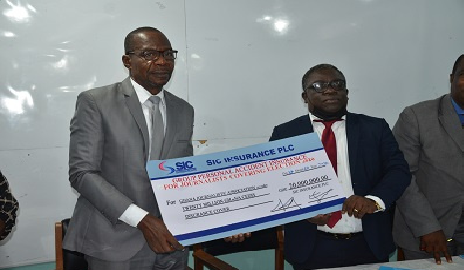 The Ghana Journalists Association (GJA) has received a GH¢20-million insurance package from SIC Insurance Company to support journalists in the coverage of the December 7 general elections.

The package will cover 500 journalists who will be accredited to report on the December 7 presidential and parliamentary elections.

The insurance — which spans November 1, 2020, to January 31, 2021 — provides each beneficiary with up to GH¢40,000 indemnity against death and permanent disability.

The GJA and SIC Insurance signed an agreement to this effect at the Ghana International Press Centre in Accra yesterday.

Support for the media

The General Manager, Operations, of SIC Insurance Company, Mr. Faris Attrickie, noted that although elections were the centre piece of democracy, there could be no democracy without journalists.

He indicated that sustaining the country’s democracy depended on the tireless efforts of journalists who were usually exposed to risks in the line of duty.

“It is against this background that the SIC has thought it wise to provide this package to ensure that journalists are covered as they go about their activities during the December elections,” Mr. Attrickie said.

“Anybody who wants to destroy democracy will first destroy journalism, and that is what most dictators do. We want to prevent it from happening, and that is why we have taken the first step to let corporate Ghana come in so that something can be done for journalists to operate safely,” Mr. Attrickie, who signed the agreement on behalf of SIC, added.

The President of the GJA, Mr. Affail Monney, signed on behalf o the GJA, and commended SIC for assisting media practitioners with “such an incredible offer”.

He said the company had planted an incredible deed and undiluted love for the media at a time when it was needed most.

“They will surely reap exceedingly abundantly beyond all that they think or imagine in the name of reciprocity,” he added.

Mr. Monney said for seven straight times, the country, with the pivotal role of the media, had conducted successful elections with three alternations of power.

That, he indicated, was a pass mark for democratic consolidation, and stressed, however, that there should be no room for complacency.

“The high voltage tensions and red hot anger which characterise elections in Ghana are enough proof that our democracy is still on the stilts,” Mr. Monney stated.

He said the media once again had an onerous responsibility not only to shape decent campaign discourse but also to ensure that the country stayed firmly on the path of democratic ascendancy.