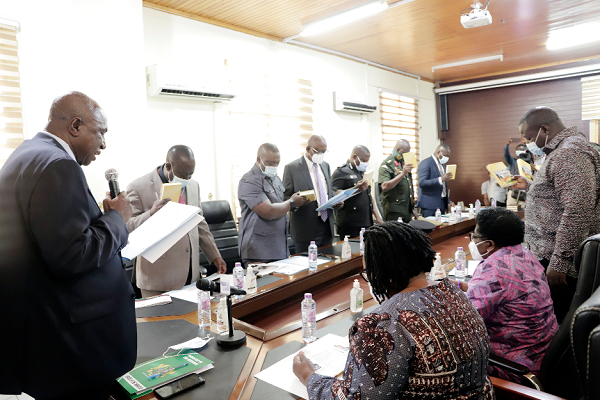 Mr Ambrose Dery (left), Minister for the Interior, swearing in the Ghana National Commission on Small Arms and Light Weapons Board into office in Accra. Picture: EDNA SALVO-KOTEY

The Minister for the Interior, Mr Ambrose Dery, has inaugurated governing boards for two agencies under the ministry.

They are the boards of the National Commission on Small Arms and Light Weapons (NCSALW) and the National Identification Authority (NIA).

The minister charged members of the NIA board to ensure the harmonisation of the National Identification System (NIS) with other state and user agencies to facilitate the accurate verification of the identities of all persons.

The minister, who inaugurated the board in Accra last Wednesday, said a reliable, accurate and credible NIS remained the pivot of the government's drive to digitise the economy.

He expressed the hope that the new board would build on the "solid foundation" laid by the previous board to improve data collection by the state and the delivery of services and transactions nationwide.

"The previous board successfully built a comprehensive, state-of-the-art National Identification System (NIS). It is our expectation that the current board would direct its effort at the Integration and harmonisation with the National Identification Authority and other states and user agencies to facilitate the accurate verification of the identities of all persons for the delivery of services and input of data of all," Mr Dery said.

The minister said the government also expected the new board to expand the NIA's operations to all regions and districts of the country in order to bring identity services to the doorsteps of all Ghanaians.

He said since the NIS remained the pivot towards the digitisation of the economy, “the entire nation will ,therefore, depend on you, the 10 eminent members of the board to steer the affairs of the NIA to realise the digitisation agenda”.

"Needless, to say, that reliable data on identities of all persons would positively impact security operations and achievement of the goal to make each person in Ghana feel safe," Mr Dery added.

At the inauguration of the board of the small arms commission, the minister charged the members to put in place robust measures to effectively control the illicit trade of small arms and light weapons in the country.

The minister said the illicit trade of small arms and light weapons were potential threats to Ghana's reputation as a beacon of peace and democracy in Africa, urging the 15-member board to oversee the implementation of public awareness campaigns, especially at border communities.

"In most of the cases, their acts of violence target civilian populations, which is why I am charging the Board of the Small Arms Commission to put in robust measures to effectively control the illicit trade, manufacture and flow of small arms and light weapons into our country.

He also called for enhanced and sustainable preventive approaches to raising the alertness and the capacities of the security agencies, especially at entry points into our country.

Prof. Frimpong Manso, who spoke on behalf of the NCSALW board, thanked President Nana Addo Dankwa Akufo-Addo and the government for the trust reposed in the members.

He said members of the board had taken note of the challenges, pledging their commitment to work with the ministry to achieve their targets.