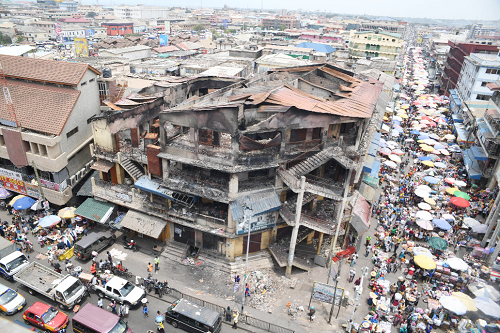 The government has started the disbursement of GH¢2.3 million to the victims of the July 5, 2021 fire outbreak at Makola in Accra to mitigate the effects of the incident on their businesses.

The emergency financial support fund is being disbursed by the Consolidated Bank Ghana (CBG) through the Ghana Enterprises Agency (GEA) to the 98 victims whose shops were affected by the inferno.

The Minister of Trade and Industry, Mr. Alan Kyerematen, yesterday met with the traders at the start of the disbursement exercise.

Mr. Kyerematen hinted that the government would soon establish a bank for traders.

The bank, he said, would have tailor-made loans with low interest rates to make traders competitive in the market to improve the overall economy.

He said the government was already in consultation with the Ghana Union of Traders Association (GUTA) and other stakeholders regarding the establishment of the bank.

The minister explained that trade and commerce played a critical role in the economic development of every country.

"Trading has become the channel between manufacturing and consumption, as every product that is manufactured is consumed in order to complete the value chain,” he said.

Mr. Kyerematen said by acting as the channel between producers and consumers, trading had the potential to provide critical information as inputs into the production process, source of employment, as well as serve as a platform for revenue mobilisation in support of government projects and programmes.

"It is against this background that among the components of the 10-Point Plan for Industrial Transformation of Ghana, there is enhancing domestic retail trade by improving market and other distribution infrastructure, as well as reducing administrative bottlenecks in domestic trade.

"Under this component, government has sought to provide direct support to business operators in the trade and commerce ecosystem through the introduction of a number of measures to facilitate trade in and out of the country,” the minister said.

He said the ministry would work with all relevant ministries, departments and agencies to design a new retail market system to streamline the operations of traders in markets.

The President of GUTA, Dr. Joseph Obeng, expressed gratitude to the government for supporting the victims.

He said access to loans was very difficult, and welcomed the news of the establishment of a bank for traders, adding that that would make their work easier.
—