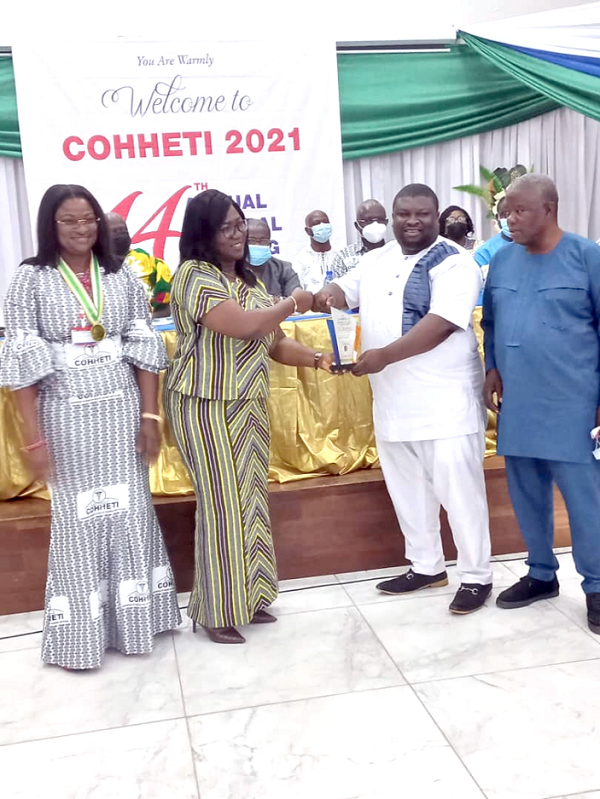 Dr Beyere (2nd from right), receiving his award from the Secretary of COHHETI, Ms Margaret Mary Alacoque (2nd from left)

Ten individuals have been honoured by the Conference of Heads of Health Training Institutions (COHHETI) for their contributions to the success of the organisation.

Key among the recipients is a Lecturer at the Catholic University College of Ghana (CUCG) and the National Democratic Congress (NDC) parliamentary candidate for Techiman South Constituency in the 2020 election, Dr Christopher Baasongti Beyere.

COHHETI comprises principals of all health training institutions in Ghana.

The awards were presented at the 14th Annual General Meeting (AGM) of the COHHETI at Koforidua in the Eastern Region last Tuesday.

In a citation that followed his award, COHHETI said the recognition was in honour of Dr Beyere’s remarkable contribution to the progress of the organisation over the years.

He helped increase the number of health institutions from 32 to 98 for both private and government health training institutions during his tenure.

Dr Beyere also helped to start the Ministry of Health Television, an online TV platform, among other achievements between 2014 and 2016. He was also a former Data Manager at the Human Resource Department of the MoH.

He is also the current Vice President of the College of Science, Arts and Education, a private university in Sunyani in the Bono Region.

According to Dr Beyere, the award was refreshing as it would inspire him to do more.

He said he felt proud that he had been able to affect lives positively through his work in the health sector over the years.