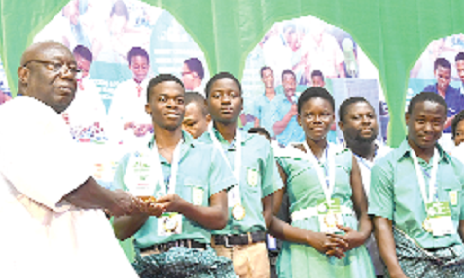 At the grand finale held in Accra last Wednesday, the winners came first with 84.3 points, beating the Yaa Asantewaa Girls’ SHS and the Nkoranza Technical Institute who scored 80 and 78.6 points, settling for the second and third places respectively.

The others were the Bolga Girls’ SHS placing fourth with 77.3 points; the Business SHS who came fifth with 74 points, and the Ghana Senior High Technical School bagging 72 points to place sixth.

Participating schools were expected to develop projects in the area of either clean cooking or food processing using renewable energy technologies.


They, therefore, came up with new product innovations, accessories to products or digital innovations to improve the performances and/or efficiencies of existing projects.

During the competition, each school was given six minutes to demonstrate and explain the environmental, social and economic benefits of their product/innovation, after which judges asked two questions of each team.

The winners presented a solar dehydrator designed to address issues relating to post-harvest losses of fruits and vegetables.

The event, which doubled as the launch of the 25th anniversary of the Energy Commission of Ghana, was attended by dignitaries, including the Minister of Environment, Science, Technology and Innovation, Dr Kwaku Afriyie, who represented the President; a Deputy Minister of Energy, Andrew Egyapa Mercer, and the Head of Cooperation of the European Union (EU) Delegation to Ghana, Massimo Mina, among others.

In a speech read on his behalf, President Nana Addo Dankwa Akufo-Addo said renewable energy was central to the nation’s energy transition and its overall social-economic development.

He also said young people were the leaders of the country’s transition to clean and renewable energy, for which reason he commended the organisers of the competition for involving them in shaping the country’s future towards that goal.

He further stated that the country abounded in energy resources, including renewable energy, adding that the development and use of those resources to improve the socio-economic well-being of the people had progressed satisfactorily under his administration.

The President, therefore, noted that the continuous harnessing of those resources sustainably required that the nation tackled critical issues in the value chain, particularly building local capacity to improve local participation.

For his part, Massimo Mina urged the schools to take steps to put their inventions out for the benefit of all.