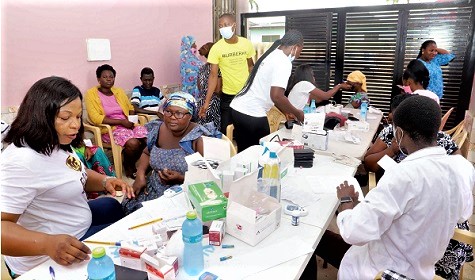 Malaria, upper respiratory track infections, hypertension, and diabetes, among others, have been detected to be the most commonest health conditions being suffered by the people of Adam Nana Electoral Area at Kasoa and its environs in the Central Region.

This came to light during a health screening exercise organised by the Assembly Member of the electoral area, Dina Tetteh, in collaboration with the RAND Medical Image.

The exercise, which benefited about 400 members of the electoral area, also saw the collaborators distributing assorted drugs free of charge to the beneficiaries.

The beneficiaries were screened for various health conditions such as obesity, hypertension, diabetics, inflammatory conditions, skin diseases, worm infections, hepatitis, breast cancer, and malaria, among others, after which the relevant drugs were distributed to them.

The health screening exercise was designed to create awareness among the community for them to appreciate the need to seek early medical treatment to boost their health, thereby enhancing productivity and income generation among them.


Speaking to the Daily Graphic after the exercise, the Municipal Director of Health Services of the Awutu Senya Health Directorate, Daniel Baah, implored members of the community to seek medical care regularly to enhance early detection of any ailment.

“Early detection of medical conditions is necessary because it saves lives, reduces the cost of treatment, enhances production and increases revenue generation,” he said.

Mrs Tetteh commended members of the community for the prompt response to the health screening exercise, and gave the assurance that it would be organised periodically.

She, however, implored them to renew their health insurance regularly to reduce the cost of treatment anytime they sought medical care.

She also urged them to be conscious about environmental cleanliness to reduce the spread of communicable diseases.

Mrs Tetteh expressed gratitude to DAS Pharma, Letap, M&G Pharmaceuticals, Miksi Chocolate, Melcom and Pizza Inn for providing the drugs and other logistics for the exercise.