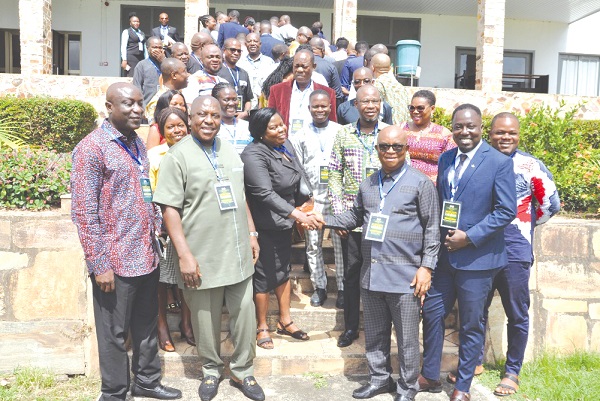 The maiden Volta Regional Human Resource Conference is underway in the capital, Ho.

The four-day event is being organised by the Volta Regional Coordinating Council (VRCC), in collaboration with Local Government Service Human Resource Professionals, Volta, to enhance the capacity of human resource personnel in the municipal and district assemblies and within various agencies in the region.

About 96 human resource officials in the 18 municipal and district assemblies in the region are attending the conference, which is on the theme: “Enhancing productivity in the Local Government Service – The role of the human resource practitioner”.

The Chief Director of the Office of the Head of Local Government Service, James Oppong-Mensah, said at the opening ceremony last Tuesday that the government spent colossal amounts of money on human resource at various work places.

He said it was, therefore, expected of the country’s human resource to offset the national debt.

“We expect good returns from what we invest in human resource,” the chief director added.

Mr Oppong-Mensah commended the VRCC for initiating the programme and said the conference made the Volta Region a pacesetter for human resource capacity building in the entire country.

The Regional Minister, Dr Archibald Yao Letsa, said the human resource practitioner was undoubtedly a critical resource in the attainment of organisational goals, of which productivity and public service performance was key.

He observed that the success and survival of every organisation depended on the effectiveness and competence level of its human resource.

However, he noted, municipal and district assemblies encountered numerous challenges in managing their human resource for improved productivity.

Dr Letsa said the ability to attract and retain competent personnel with high capacity would lead to improved quality in service delivery at the local government level.

The acting Volta Regional Coordinating Director, Augustus K. Awity, said the role of human resource had been underestimated for far too long, adding that it was time it was given recognition for its role as the fulcrum of all professionals.

He said the ability to analyse problem situations, determine solutions and fill capacity gaps, were human resource roles which kept the job on course.

The Human Resource Manager of the VRCC, Cyril Dzinyanu Xatse, commended the Office of the Head of the Local Government Service for upgrading the human resource units within the sector to departments of human resource, and urged human resource professionals in the service to adhere to the ethics of their profession.