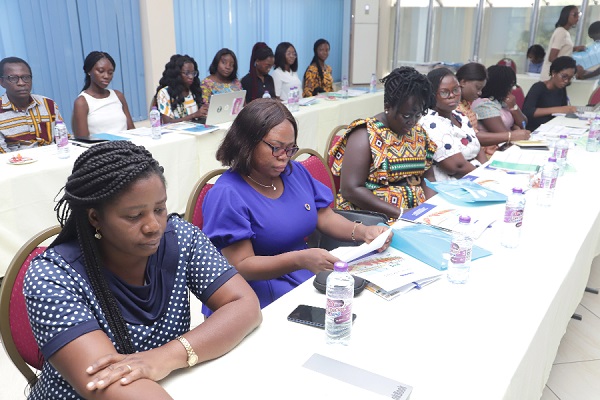 ome guests in the Dissemination Workshop for Women in Engineering in Accra
30.5k Shares

The Council for Scientific and Industrial Research (CSIR) has developed a gender policy to ensure that women scientists and engineers are given equal opportunities as far as employment and career developments are concerned, the Director General of the CSIR, Prof. Paul Bosu, has said.

According to him, the council had, over the past few years, increased the proportion of female scientists and engineers from 22 per cent to 25 per cent.

"Our target is to push this figure to at least 30 per cent in the next few years," Prof. Bosu said in a speech read on his behalf by the Director of the CSIR-Food Research Institute, Prof. Charles Tortoe, at Dissemination Workshop for Women in Engineering Education and Careers in Benin and Ghana in Accra yesterday.

The CSIR-Science and Technology Policy Research Institute (STEPRI), in collaboration with the School of Economics, Social-Anthropology and Communication for Rural Development at the University of Abomey-Calavi, Benin, conducted the 36-month project which sought to bridge the gender gap in engineering.

Being the foremost research and development organisation in the country, he said, the CSIR took very serious initiatives that sought to promote the role of women in science, technology and innovation (STI). For that reason, he said, the Women in Engineering Education and Careers in Benin and Ghana Project, launched in October 1, 2020 was timely.

“Women play an important role in science-driven national development agenda, especially in our part of the world where women's contribution to socioeconomic development is "massive" and evidently clear for all to see.

“Whether or not in agriculture, education, commerce, health care, or manufacturing (small to medium scale), our mothers and sisters are giants in their own rights. Unfortunately, however, the naturally industrious and leadership flare of our women have not extended into the formal socio-political circles,” he said.

Prof. Bosu said it was a known fact that women were inadequately and disproportionately represented in the formal areas of Science, Technology, Engineering and Mathematics (STEM) endeavours and that the situation arose from the overall gap in education between the genders over the years while efforts to bridge the gap had been ongoing.

“Therefore, we are confident of the future. At the national level, Ghana has made significant strides towards achieving gender parity at the sub-level of basic education. There are concerns when it comes to performance between genders, especially in science and mathematics where girls have generally lagged behind boys,” he said.

A former Deputy Director, CSIR-STEPRI, Dr Godfred Frempong, who chaired the event, said the gender gap in engineering education and careers remained a developmental issue in Ghana, Benin and Africa, as a whole.

Women, he said, were woefully underrepresented in the engineering workforce and that needed to be addressed and that “as a policy research institution we are well positioned to open the black box, unearth the systemic barriers to women in engineering education and careers, understand the situation and generate research evidence for enhanced policy discourse that will help provide home-grown and tailor-made solutions”

The project, he said, aptly fitted into the core mandate of the CSIR-STEPRI which was to conduct research to provide knowledge-based information and contribute to the formulation and implementation of policies and programmes for socio-economic development of Ghana based on Science, Technology and Innovation (STI).

The Project Officer of the International Development Research Centre (IDRC), Canada, Dr Katie Bryant, who joined the event virtually, said the project was very important in trying to address the gender gap in the field of engineering.

A Principal Research Scientist at the CSIR-STEPRI, Dr Rose Omari, said STEM fields such as health sciences had seen a marked improvement in female enrolment in universities over the years but the field of engineering still recorded low female enrolment.