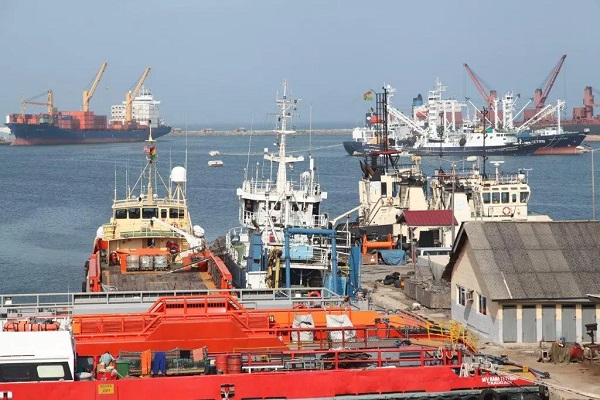 Two multi-million dollar projects at the Takoradi Port — the Atlantic Container Terminal (ACT) and a dry bulk jetty — have been inaugurated, with an assurance by the government that it is determined to improve maritime trade and position it as a major engine of economic growth.

President Nana Addo Dankwa Akufo-Addo, who gave the assurance when he inaugurated the projects yesterday, said the ongoing expansion and transformation at the port was testament to the overarching objective of expanding the country’s economy, while boosting regional and international trade.

Phase One of the container terminal was developed by an indigenous engineering firm, Ibistek Ghana Limited, at a cost of $250 million, while the dry bulk jetty was developed at a cost of $86 million by the Ghana Ports and Harbours Authority (GPHA) for the handling of manganese, clinker, bauxite and iron ore.

The President also cut the sod for the development of a floating dry dock facility for ship and rig repairs, to be developed by a private entity, Prime Meridian Docks Limited (PMD), as well as the development of an oil and gas services terminal being constructed at a cost of $98 million. 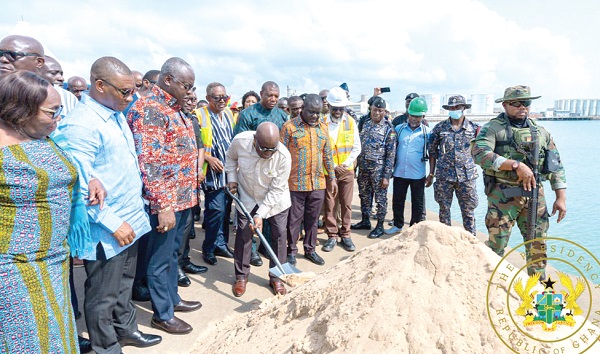 The ACT is expected to accommodate the increased demand in cargo transhipments and local deliveries through the port.

It has a holding capacity of 9,000 Twenty Equivalent Units (TEUs), with an extended quay wall of 600 metres and a draught (depth) of minus 16 metres below chart datum.

Besides, it is equipped with modern ship loaders and eco-hoppers for the safety of workers and other members of the port community.

The project marks the first time a wholly owned Ghanaian company has been involved in port development in the country.

The dry bulk jetty has been equipped with an efficient cargo handling system to facilitate the accurate measurement of various export volumes for manganese and bauxite to check compliance.

With a design capacity of 2,500 tonnes per hour, the new bulk jetty terminal is also expected to improve productivity, shorten the turnaround time of vessels and bring big savings to shippers of manganese and bauxite.

President Akufo-Addo said the new projects were strategic in enhancing the cargo handling capacity, maintenance and repairs of ships, and also met the demands of the rigours of the oil and gas services sector within the enclave of the port.

He said since the Port of Takoradi commenced operations in 1928, it had gone through many phases of development to put it in a position that met growing maritime trade, as well as the oil and gas services sector.

“The idea that we can project our development goals on the production and export of raw materials and still think we can rid ourselves of the shackles of under-development and poverty is not a well-grounded one,” he said.

The President said the government had worked hard to modernise the Takoradi Port and diversify its reliance on the export of raw materials such as manganese and bauxite, which had never yielded high value returns to the country.

As part of strategies to promote value-added products and sustainable mining, he said, the government had put a five million-tonne limit on the quantity of manganese to be mined for export.

“We also intend placing an annual volume limit on the export of raw bauxite as part of the Integrated Aluminium Development Project,” he said

He commended the GPHA, Ibistek and their partners for the considerable developments which would trigger improved service delivery and lower tariffs, to the advantage of the Ghanaian and the West African economies, while promoting a competitive environment for maritime trade in the country.

The Minister of Transport, Kwaku Ofori-Asiamah, in his remarks, commended the President for supporting the ministry in its initiative to introduce local participation in ports development.

The Director-General of the GPHA, Michael Luguje, said the Takoradi Port expansion programme, which covered the major marine dredging works, the construction of a breakwater and the bulk cargo and container terminals, constituted a total investment of about $1 billion.

He said the ACT would provide upgraded facilities for the handling of containers and conventional cargo.

“With a modernised Takoradi Port and the giant Port of Tema which is already a leader in container handling in West Africa, Ghana’s positioning will be further enhanced as the maritime trade and transport gateway to West Africa,” he said.

Mr Luguje, however, said the realisation of the full benefits of the dry bulk terminal would depend heavily on efficient transportation and delivery of manganese and bauxite from the mines to the port.

He, therefore, appealed for the urgent rehabilitation of the Western rail line to facilitate the deliveries.

The Chairman of Ibistek, Kwame Gyan, in his remarks, said the company and its partners had, since 2017, invested $332.7 million in various projects at the Takoradi Port, a feat he said was made possible with unwavering support from the President.

“We are presently mobilising the necessary gantry equipment, materials and systems for operational readiness once the necessary recruitment of staff is done,” he added.

The Western Regional Minister, Kwabena Okyere Darko-Mensah, said the port had been a major propeller of economic activities in the Takoradi metropolis.

He, therefore, appealed to the government to fast-track efforts at making it the hub for cocoa exports, since the new developments had made adequate provision for shipping lines to operate effectively.