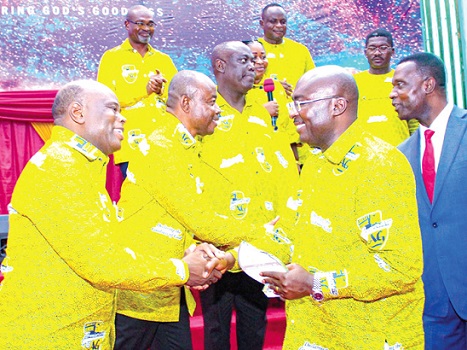 The Vice-President, Dr Mahamudu Bawumia, has assured Ghanaians that government will deploy all efforts to enable the country to sail afloat in the face of the current economic challenges.

He has, therefore, urged Ghanaians to be hopeful in these times of uncertainties and difficulties.

At the Golden Jubilee anniversary celebration of the Liberty Centre Assemblies of God Church at Abeka in Accra yesterday, Dr Bawumia said

“We are all witnesses to the difficult and challenging times the world and for that matter, the country has been going through in recent times.”
He said it had been a period in the last couple of years characterised by economic uncertainties and challenges that had caused even stronger nations to crawl.

Dr Bawumia said the government recognised the difficulties and uncertainty Ghanaians were experiencing in the country and emphasised that with renewed strength and hope in the will of the Lord and with new ideas and sound policies, “we are forever confident that we will ride the storm and turn things around to the glory of God”.

“We have been working, while at the same time trusting God for his unfailing love, and thankfully we are beginning to see the power of the Lord. We will continue to work hard and keep our trust in him,” he stressed.

While congratulating the church on how far it had come in the last 50 years, the Vice-President said it was amazing that what began as a daily morning devotion in the living room of a woman, Rosina Kweifio, had produced the many numbers who were gathered for the anniversary.

He described the feat as remarkable and said “with God nothing is impossible, and I have faith that we, as a country, and as a continent, can do things that seem impossible and we can prosper and advance this country by the grace of God”.

Dr Bawumia said it was important to be mindful that the milestone of 50 years had been chalked up with the contribution of many others who supported in diverse ways to bring the church to its current state.

Likening the church to any human institution, Dr Bawumia said the church had not been spared both spiritual and physical challenges but had come through and “today we have all gathered here to celebrate 50 years of its existence”.

He said it was necessary that the church did not forget the sacrifices of those who laboured, worked hard and laid the foundation on which the church was built.

He lauded the church for committing to build a hospital, dubbed “Agenda 112”, to serve the people of the community as part of its social responsibilities and urged the congregation to support the leaders to bring the vision to fruition.

The Founder of the Dominion Christian Centre in Zambia, Bishop Andrew Mwenda, who was the guest preacher, stressed the significance of the goodness of the Lord, saying at 50 years, the church could not afford to be stagnant but that it must be a period for the church to address its spiritual, social and economic problems.

The Senior Pastor of the Liberty Centre Assemblies of God Church, Rev. Dr Sam Ato Bentil, said the anniversary was a period for the church to reflect on its humble beginnings and the good things the Lord kept doing for the church.