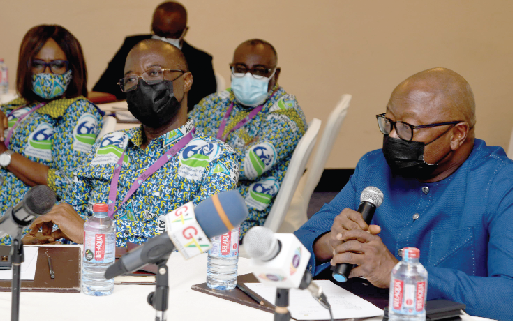 The Sierra Leonean Minister of Energy, Alhaji Kanja Sesay, has commended the Volta River Authority (VRA) for its resilience in the power sector that has enabled it to maintain its position as the flagship power utility provider in the country and beyond.

“The VRA has made us proud. One of the problems with institutions in Africa is sustainability and continuous existence in operation in an efficient manner, and I think the VRA has been exceptional when it comes to that. It has been through several challenges but continues to move along,” he said.

Alhaji Sesay made the commendation at a stakeholder engagement between the management of the VRA and some officials of the power sector from Sierra Leone.

The Sierra Leonean delegation, which was led by the Vice-President of the country, Dr. Mohamed Juldeh Jalloh, included the High Commissioner of Sierra Leone to Ghana, Mrs. Frances Virginia Anderson, and the Financial Secretary of the Ministry of Finance, Mr. Shar Jusum, while the Ghanaian officials included the Technical Advisor, Mr. Cyril Grant, and the Deputy Director, Mr. Sulemana Abubakar, both at the Ministry of Energy.

The discussions centred on the history of the VRA, its mandate, vision and strategy and key statistics on its power operations and digitalisation system.

“We have followed your story and it is similar to our story; you were like us some years ago but you managed to cross over your challenges and our country wants to learn how you navigated through the difficulties to get to where you are today,” Mr. Sesay said.

According to him, Sierra Leone was still struggling to meet its power demand, and expressed optimism that its energy sector would soon reach the level to which the VRA had taken the energy sector in Ghana.

“The VRA is a very important partner in this very journey of ours, where we have already benefited from your expertise. We are here to benefit from the guidance that some of my staff have benefited from and I look forward to a continuous relationship,” he said.

The Manager of Corporate Strategy and Planning at the VRA, Mr. Clement Boakye, who delivered a power point presentation, said the company was digitalising its system to ensure efficiency in its operations.

He also said the VRA had commenced processes to develop Akosombo, which hosts its 1,090 megawatts dam, into a smart city and technology hub.

In line with that, he said, electronic buses would be introduced in the town next year.

Mr. Boakye said the power distribution company was also considering building solar panels in the northern part of the country.

Currently, he said, there was an ongoing feasibility study in Akuse in the Lower Manya Krobo District to develop a 50-megawatt floating solar project.