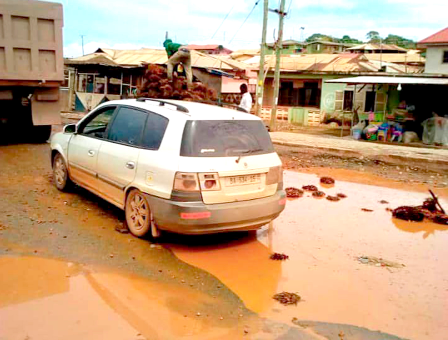 The much awaited sod-cutting ceremony for the reconstruction of the Tarkwa-Agona-Nkwanta road by the President, Nana Addo Dankwa Akufo-Addo, recently no doubt remains one of the most exciting news for people in the region, as it offers a major boost for doing business in the area.

The road, which is the vital link between the Western, Central and the Western North regions as well as the port of Takoradi, is being constructed at the cost of €95 million and when completed will reduce travel time, improve healthcare delivery and ambiance for business across the region.

The stretch currently is in a very bad shape riddled with countless potholes, part of it with asphalt surface completely washed off, badly shoved and few good stretches with no road marking/signage with a lot of cracks.

The recent rains have worsened the situation, making it tortuous to travel on.

The road is a sorry state, especially when it rains

On many occasions, the members of the communities along the stretch led by some traditional rulers have demonstrated against the poor nature of the road.

Members of communities along the stretch are of the view that irrespective of the time of the year, aside from the frequent accidents, during rainy seasons they carry mud to their homes just by crossing the road and when the sun is up, they receive clouds of dust leading to respiratory diseases.

The project, which will last for 36 months from Tarkwa to Agona-Nkwanta covering 66-kilometres and is being constructed by M/S Rango-Gabriel Couto Consortium, has already commenced due to the deplorable nature of the road.

The stretch known as Inter-Regional Route 6 (IR6), under the trunk road system of the Ministry of Roads and Highways, is one of the vital links between the south and the north of the Western Region.

The route connects the minerals and agricultural produce of the Western, Ashanti, Western North, and Central regions to the Port of Takoradi, aside from the fact that towns such as Bibiani, Sefwi Wiawso, Obuasi, Dunkwa, Ayamfuri, and Tarkwa will be the great beneficiaries.

It will intersect the National Route 1 (N1) at Apimanim in the Ahanta West District, which links Takoradi-Agona-Elubo N1 to Cote d’Ivoire and beyond and also receives traffic from neighbouring counties to the east — Togo, Benin and Nigeria.

Before the sod-cutting ceremony, President Akufo-Addo said the completion of the stretch would lead to the removal of the usual congestion along the road, especially the drudgery at Tarkwa, the famous mining town.

He said Tarkwa, being a mining hub in the country, would receive its fair share of development and that aside the road currently under construction “we have a lot of things that will ensure that the best is delivered to the people of the Western Region and beyond”.

The President urged the people of Tarkwa to rally behind the government as it worked to ensure development was delivered to all.

The President also visited some project areas and met with the feuding parties in recent chieftaincy conflict at Upper and Lower Dixcove in the Ahanta West Municipality and commended the two paramount chiefs for the resolution of the dispute and holding on to peace for development.

As a region with enormous resources that support the development of the country, the Minister of Roads and Highways, Mr. Kwasi Amoako-Attah, at the ceremony said the government would not forget the Western Region in the first and second declaration of the year of roads.

The reconstruction, he said, would take into consideration its current traffic volume and the construction of a two-lane single carriageway to asphalt finish with major traffic management improvement in the Tarkwa Township.

“There will be the provision of major drainage improvements in all towns and villages along the entire stretch with streetlights, walkways and most importantly road markings and signage,” he said.

The region, he said, was very strategic and aside from its richness in minerals and agriculture contributed immensely to the social and economic development of the country. “The route provides easy connections that serve as the shortest and most efficient route for the transportation of gold, manganese, bauxite, cocoa, timber and other minerals for onward shipment," the minister noted.

He said the government paid serious attention to the procurement process and had all approvals, including commercial as well as financial agreements from Parliament as far back as August last year.

Mr. Amoako-Attah said considering the area and the region, one of the most important aspects of the project was the adoption of environmentally friendly technology, including the recycling of all existing pavement materials into the new road — thus saving cost, time, energy, soil and aggregates.

The project, he said, would see the removal of the usual congestion along the road, especially at the Tarkwa central business area. “Let me assure you all that the myriad of potholes and the constant repair due to the current nature along the stretch will disappear,” he added.

He said when completed the road would not only lead to the promotion of inter-regional trade and transit in the sub-region, but bring traveling comfort to the people and shorten travel time from Tarkwa to Takoradi and vice-versa.

The Western Regional Minister, Mr. Kwabena Okyere Darko-Mensah, commended the people of Tarkwa Nsuaem for their patience, saying, “Today, the project is ready to take off and it will be delivered to you.”

He said the government would not let the region down and that the regional coordinating council would follow all ongoing projects and others that were about to start to ensure that the region benefitted.

The Divisional Chief of Mahawomo in the Tarkwa area, Nana Kwabena Gyan, commended the President for the fulfilment of his promise to see to the construction of the Tarkwa road, which had become very bad and a threat.

He said much as the road remained one of the important needs, the area also required other projects, while there was also the need to pay attention to the railway network to ensure other bulk cargo was transported via rail, while other roads from the Central Region to Tarkwa needed to be considered.

The communities along the stretch welcomed the news of the commencement of work and of the contractor moving to site and commended the government and the President for personally being at the sod cutting for the project.