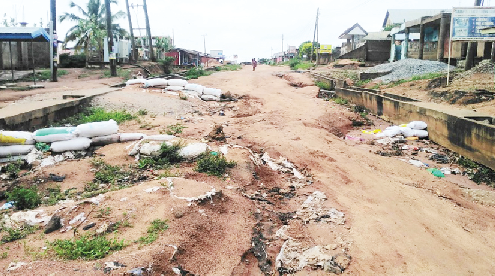 Some portions of the bad road

The rains have returned and as usual, communities with bad road networks will be at the receiving end, with most of those affected communities sometimes rendered inaccessible.

The major road from Ablekuma Fanmilk through Omanjor to Dwenewoho in the Ga North Municipality which forms part of the Trobu Constituency is a perfect example of a bad road network which has a bridge synonymous to a death trap waiting patiently to snap.

This road connects Omanjor to Olebu, Amamole and Pokuase but has become almost impassable, and is causing a great deal of inconvenience to its users.

An ongoing drainage construction came to an abrupt halt and that has contributed to the further deterioration of the already bad road.

As a result, the uncompleted drainage has been left suspending in mid-air, as the rains have washed away the soil on which it rests, with other parts of the gutter cracking and breaking, which would obviously need a reconstruction at a cost.

Another portion of the road in front of the Zongo chief’s palace has developed four big ponds, making it unusable. Drivers have to divert using another route and that new route is also gradually developing wear and tear, making travelling on it very uncomfortable.

The major concern, however, is the bridge at the “Ball Close” junction which has seen a gradual but rapid erosion of the soil around it, leaving barely a thin strip of land for both vehicular and human traffic.

Hitherto, vehicles that used the Dwenewoho road had to exercise extreme caution when they got to the bridge, to avoid plunging themselves into the huge gutter on its side.

Thus, on Wednesday, October 28, 2020, vehicular traffic from Omanjor to Dwenewoho was halted because the rains had eroded a greater part of the soil around the bridge, leaving the bridge unusable.

A year on, the situation has not been resolved but is rather getting worse by the day.

A taxi driver, Patrick Agbeshie, who stays very close to the bridge, said during its construction, he was snubbed when he tried to offer some advice to the engineers about the movement of the water when it rained, to enable them know how to go about the construction.

“When I tried to advise them on how best to position the bridge, they asked me whether I was an engineer, and now the work of the experts is the result of the current situation,” he said.

Trotro drivers, Moses Manu Gyan and Abdul Kareem who ply the Omanjor to Lapaz route said they have to park behind the bridge to call for passengers because they cannot cross the bridge to Dwenewoho to load their vehicles.

This, they said, was a worry to the passengers who usually will walk for long distance before boarding the vehicle. They called for an immediate solution to the problem.

Last year, the Assembly member for the Omanjor Electoral Area, Mr. Ellis Nii Addo, said inspection on the roads had been completed and that contract had been awarded for construction to start.

“The Dwenewoho, Capital Hills road down to Agenda has been inspected and the contract awarded, with the contractor expected to be on site but I don’t know what is causing the delay.

“As a temporary solution to the problem, some truckloads of gravel will be used to fill eroded parts of the bridge so that the vehicles can use it till the permanent construction is done,” he said.

Indeed, some gravels were used to fill up the gullies created by the erosion but all have been a waste of resources as the rains washed them away, with the old situation currently being manifested again.

It has been a year now and the situation still remains and speaking to Mr. Addo again, he said the contract that was awarded last year still held to the best of his knowledge but he could not readily tell the main cause of the delay.