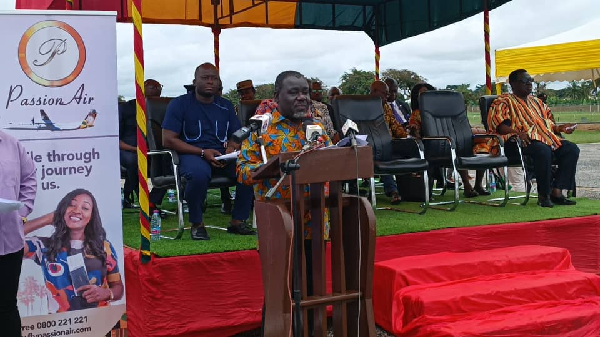 The Minister of Transport, Kwaku Ofori Asiamah has praised President Nana Addo Dankwa Akufo-Addo for always delivering on promises made to the Ghanaian people.

According to him, although Ghanaians still treat the promises of politicians with suspicion, President Akufo-Addo had shown that he was a man of his word by delivering on his key policies.

Mr Asiamah made this known on Monday during a ceremony to herald Ghanaian airline, Passion Air's maiden flight to the recently renovated Sunyani Airport in the Bono Region.

He said the President had kept his word to the people of Bono after he assured them that commercial flights would soon operate from the airport.

Mr Asiamah further urged Ghanaians to always say a prayer for the President so that he will be able to surmount all challenges.

"You will recall that on 3rd August this year, I accompanied President Akufo-Addo to commission this airport following certification by the Ghana Civil Aviation Authority for the airport to resume flight operations," Mr Asiamah said.

"At the commissioning. I did inform you that, Passion Air, one of the domestic carriers was finalising modalities for the commencement of flight operations to this airport. It is my pleasure to announce that today's inaugural flight by Passion Air is a clear demonstration of the government's commitment to improving air connectivity across the country and beyond to boost trade and tourism".

The Minister was speaking at an event to welcome Passion Air's maiden commercial domestic flight to the Bono region.

Onboard the flight which lasted 45 minutes from the Kotoka International Airport to the Sunyani Airport were Members of Parliament; members of the Ghana Airports Company Limited Board; management and staff of Passion Air; pressmen and other passengers.