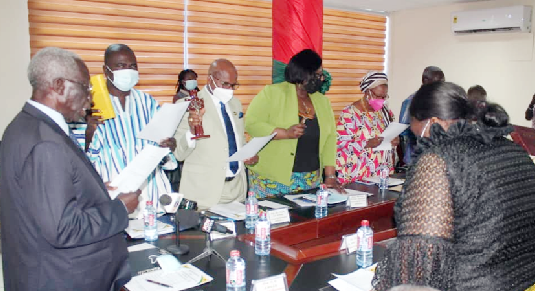 He said the world over; decentralised revenue was one of the cardinal drivers of revenue to a country's Gross Domestic Product (GDP).

Mr. Osafo-Maafo made the call at the inauguration of the Local Government Service Council in Accra last Monday.

The 14-member Council is chaired by Dr. David Wellington Esaw.

A representative from the Ministry of Health is yet to be appointed.

“We cannot be proud as local government actors with such under performance and the least you can do as a council is to turn the disturbing situation round because ‘Ghana Beyond Aid’ requires improvement in our domestic revenue mobilisation,” he said.

He challenged the council to improve the situation by bringing their diverse expertise to bear.

He said in order to justify why people should continue to pay, there must be visible signs of improvement at the community level which must be commensurate with the rates paid.

Dr. Esaw, for his part, expressed gratitude to President Nana Addo Dankwa Akufo-Addo for the nomination and gave an assurance that the council would work in unity to achieve its mandate.