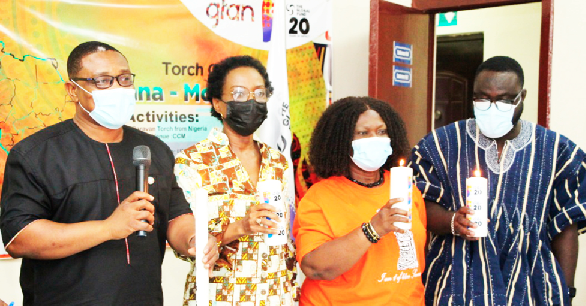 Ghana last Friday received a torch from Nigeria in celebration of the 20th anniversary of the Global Fund.

Created in 2002, the Global Fund has supported 155 countries and regional grants as of June 2021 to fight HIV, tuberculosis (TB) and malaria with more than $50 billion, making it one of the largest funders of global health.

In Ghana, the fund has supported the fight against the three diseases with over $1 billion while helping to strengthen health systems across the 155 countries.

The event is being marked from October 22 to November 6, 2021, with various activities, including football and poolside events.

The celebration is also to document and elevate civil society and community voices to reflect on the journey with the global fund, what the partnership means to the developing world and what world leaders need to do to maximise this impact.

The global fund mobilises and invests more than $4 billion a year to support programmes run by local experts in more than 100 countries.

She said Mr. Annan’s legacy through the global fund had helped saved millions of lives and helped change the trajectory of the HIV response in Ghana.

The Programme Manager, National AIDS/Sexually Transmitted Infection Control Programme, Dr Stephen Ayisi Addo, said Ghana had been a great beneficiary of the fund, adding that about 226,000 people were on AIDS treatment in the country because of the fund.

The Programme Manager, National Malaria Control Programme, Dr. Keziah Malm, said the fund had helped the country to scale up to the needed interventions in controlling malaria in the country.

The fund had been one of the key supporters in the fight against malaria in the country, she added, and mentioned support in areas such as indoor residual spraying in three regions, intermittent prevention treatment for pregnant women, the distribution of insecticide treated nets and the management of malaria in hospitals.

The global fund emerged at a time when AIDS, tuberculosis and malaria looked unbeatable, with the world’s deadliest epidemics claiming millions of lives with devastating consequences for families and communities around the world, especially in poor countries.

The birth of the fund in 2001 changed the story of global health, uniting world leaders, communities, civil society, health workers and the private sector to fight AIDS, tuberculosis and malaria.

The fund is a partnership designed to accelerate the end of the three diseases.

Through its work, the fund is said to have saved 44 million lives and provided prevention, treatment and care services to hundreds of millions of people.