The reservoir that will supply water to the pumps Follow @Graphicgh

A GH¢500,000 solar-powered mechanised water system has been inaugurated for Kadewaso, a cocoa growing community near Anyinam in the Atiwa East District of the Eastern Region.

It is a cashless system which uses a coin (token) with a chip loaded with credit and water starts flowing after the coin is attached to the facility.

The facility has a 60-cubic metre overhead storage tank with four water pumps strategically positioned at four vantage points to serve the community, which has a population of over 7,000.

While the community members will not be made to pay cash for the water they fetch, households have been given tokens with which they can access the water at the pumps.

Money is transferred onto the token just as is done for phone scratch cards, depending on how much water a person is supposed to fetch.
Hitherto, the people relied on a nearby polluted stream for their water needs.

The water system was provided through a joint venture involving the Ghana Red Cross Society, Nestle Ghana Limited and the International Federation of the Red Cross (IFRC) to provide safe drinking water to small communities.

At a short ceremony to officially inaugurate the new facility at Kadewaso last Monday to mark this year's World Water Day on the theme; "Ground water - Making the invisible visible," the President of the Ghana Red Cross Society (GRCS), Mr Gyimah Kwame Akuafo, said the partnership agreement covered a period of five years starting from October 2014, to support water and sanitation activities in Ghana and Cote d’Ivoire.

He said during the period under review, 170,000 people in Ghana had access to safe drinking water 4,581 also had access to improved sanitation, while 186,225 other inhabitants were reached with health and hygiene education activities.

The venture, he explained, had increased access to water and sanitation, behavioural change towards prevention of WASH-related diseases and improved capacity in management and delivery of sustainable WASH services.

He stated that the GRCS was able to reach out to 34,681 out of 45,000 beneficiaries projected, representing 77.1 per cent in water supply.

Mr Akuafo said the system set up was projected for 12 communities out of which 11 were completed, representing 91.7 per cent, while the number of people reached with health and hygiene promotion was 53,823 out of a projected number of 60,000, representing 89.7 per cent.

The GRCS president stated that his outfit, in partnership with their collaborators, would establish an improved long-term sustainable and strengthened water system provision, with tailored training and mentoring provided by specialists with more business development approach.

The Managing Director of Nestle Ghana Limited, Mr George Badaro, said access to potable water should not be difficult for people who needed it and that the new facility had to be sustained. 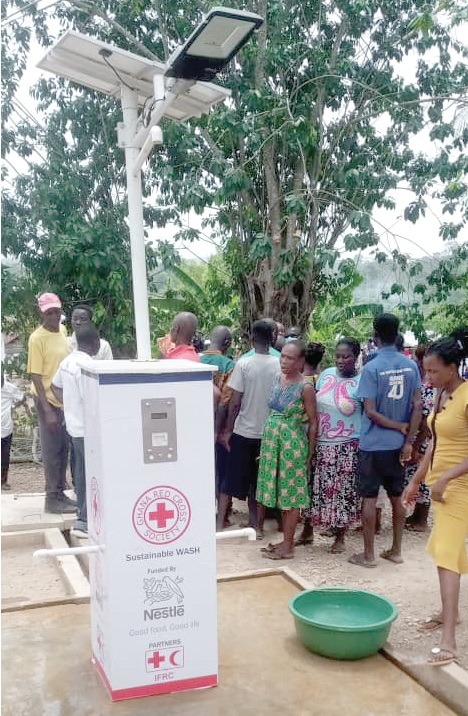 He said water was important to life as a basic requirement for health and well-being of people and their families, explaining that the absence of water compromised the quality of life.

Mr Badaro stated that over 7,000 lives within the community and its surrounding area would be impacted positively.

He indicated that the initiative would go a long way to end the struggle residents went through to access water and urged the community members to value and keep the facility very well.

He expressed his appreciation to the GRCS and other partners for their partnership and the chiefs and people of the community for their support in the provision of the facility.

The Krontihene of Kadewaso, Nana Kojo Boadu, who was happy about the provision of the new facility, however, appealed to the donors for additional water pumps in the town since the four provided were inadequate.